Sabine really managed to get to the heart of the matter with her innocent question. She asked this today – the first actual day of doing touristy things ( it was hot as stink and we couldn’t decide what to do).

Unfortunately we have been stuck in Campbellford for more endless trouble shooting with our, as yet, unnamed trailer. Something electrical, which is always reassuring, but it got fixed and while it did I spent a lot of time at Dick and Lynn’s pool grading Anderson’s attempts at pool parcours and underwater handstands. I did also get to visit my friend Kim who moved to Campbellford a couple of years ago which was amazing until it became clear our quick coffee catch up before we hit the road was being extended….awkward! ….I was stuck with the kids with no car and no real idea of when the ride was coming. Adrift in Campbellford. Chris finally appeared but there was still work to do so we settled in for an other night.

But the next morning FINALLY we were off! Not without one last swim and some expert Tetris getting it all in. And also, can I just mention how amazing it is that we have all these incredible friends and family who let us crash at, really, a moments notice (cause we don’t know what’s happening tomorrow). But I have never washed so many sheets and made so many beds. It has really made me realized how little I do that in my actual home.

So we hit the road – first stopping at Doohlers (rumour has it that it might actually be named Canada’s best bakery this fall). They were out of sticky buns and it was only 10am so we had to get 6 doughnuts, not my fault. We drove along the winding country roads, rolling hills, grazing cattle, perfect hay bales with one SUPER ANNOYING 3 year old. Seriously – WHAT WERE WE THINKING? The year ahead looms with the constant questions – can I watch a show? Can I watch a show? Can I have a special treat? Can I have bubblegum? WHAT the heck – bubblegum? and the demanding tone – she is just NOT taking to using the word please – I mean like ever. Honestly I have so so much love for my parents for never throwing me out the window of a moving car,

We had a little 15 minute run out of gas scare after taking a detour to avoid traffic – we turned off the ac, music and lights and were lucky enough to coast into the gas station. Next stop – MONTREAL! Well actually just the IKEA on the outskirts of Montreal for linens because I can not sleep in the sparkly mermaids tail any longer and I hate looking at that damn paw patrol blanket. IKEA at dinner time with four hangry people and one person who wants to compare the measurements of every duvet and all the sheet sets is a super special time. First of all if you have a queen bed you buy a queen sheet set and duvet right? Basic. But did you know that all the duvets in IKEA have slightly different measurements and that the queen sheets are like 20 inches longer than a “queen” mattress in a camper. Well – you’re welcome. Yes I didn’t want to know that either because it added a LOT of time onto our drive. We finally purchased the linens, hit the restaurant ( you can get wine at IKEA – and on a side note there are changing tables in both the women’s and the men’s  washrooms and they come with a variety of diapers)  let the kids run like banshees and climbed back into Ole Smokey only three more hours to go until Quebec City!

And friends – WE ARE IN QUEBEC CITY!!! We arrived at 11:00pm to meet the greatest guy – who works at the Coop Camping Saint Esprit on Rue des Trois Saults (which translates into road of three jumps). He quided us into our little site with his golf cart and then buzzed away insisting we could pay him in the morning.

It seemed like we may have lost any gains in the set up department during our extended Campbellford jaunt because it took what seemed like forever to pop up. AND it was cold – a good ten degrees colder than the day. But we managed to get it done and crawl in. This campground is a cross between super rustic and Hoarders and the only bathroom we have been able to find has a spinal board hanging in it. Needless to say not having a toilet close by is proving to be a major bummer. I have been doing that thing where I wake up and have to pee but then pretend that I don’t so I don’t have to go outside. But THEN I just toss and turn and get no sleep while I think about how much I need to go to the bathroom. Middle aged Camper troubles. 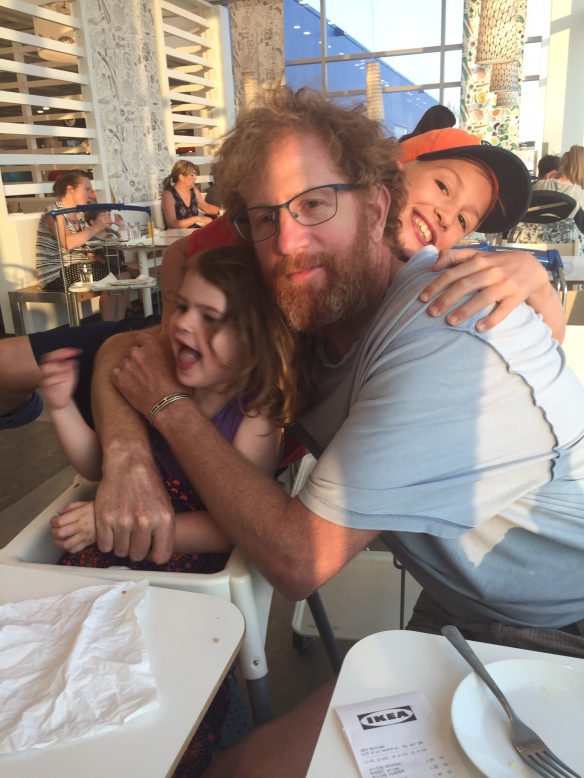 Dins at the always classy IKEA 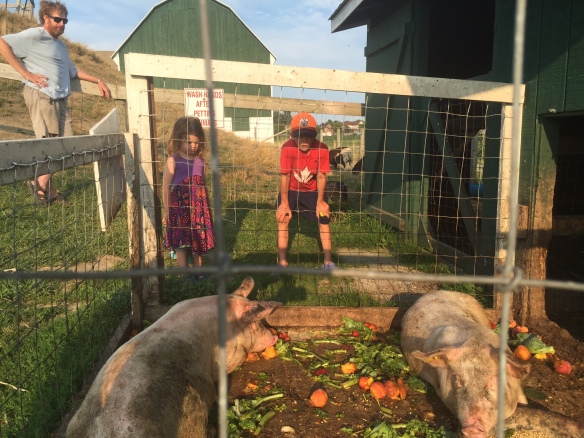 Visiting a farm on our drive to Cambellford 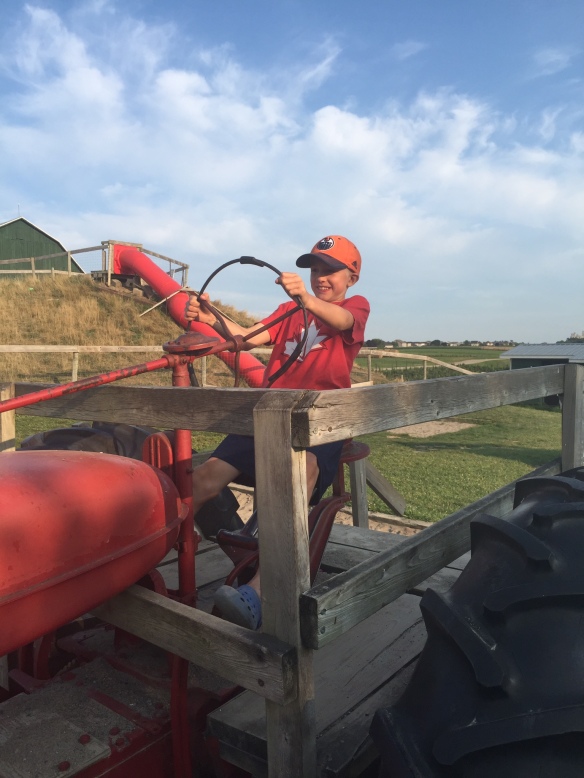 Alberta in that boy somewhere