Maple Canyon and the burnt trees above

Breakfast companions in Radium BC

We still love each other! 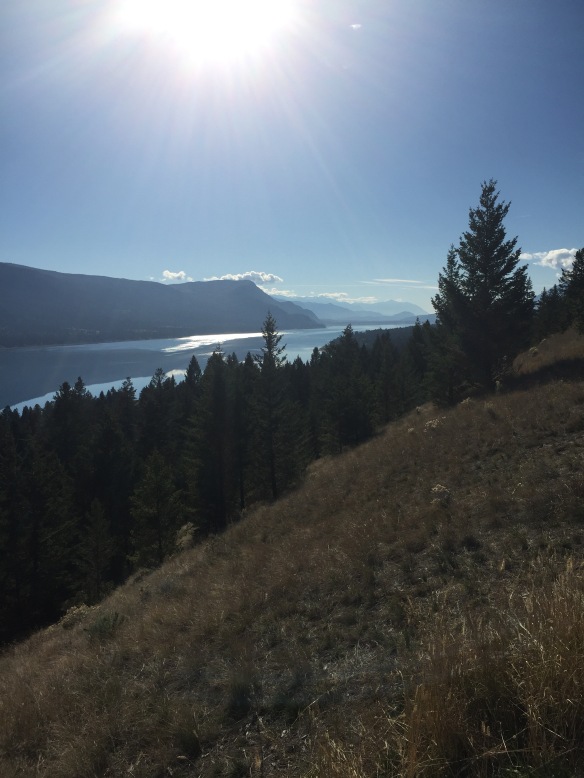 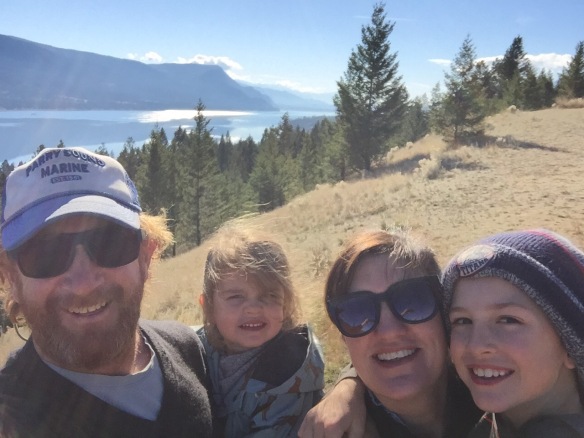 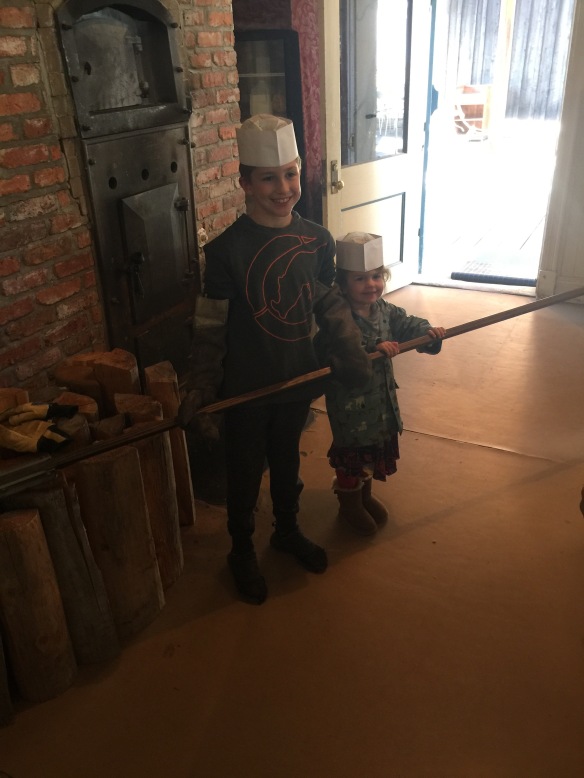 Bakers in Fort Steele BC 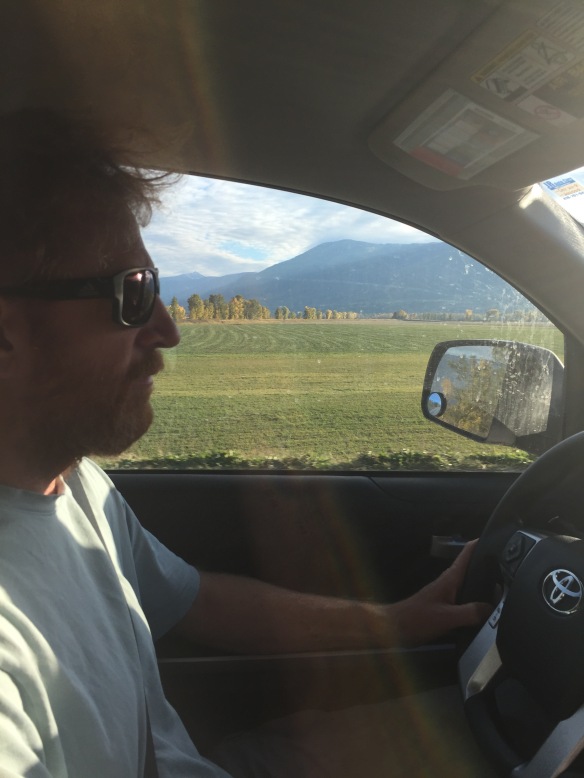 My now familiar view of Chris 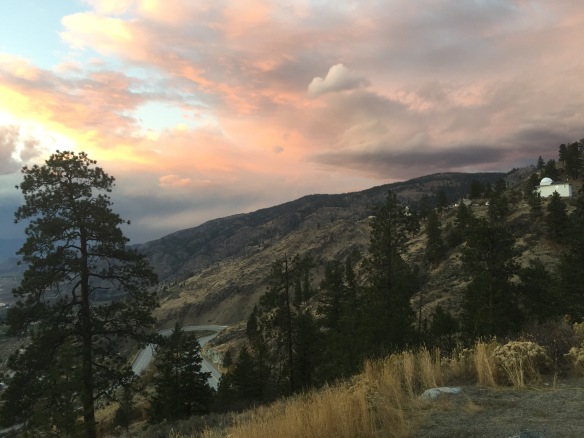 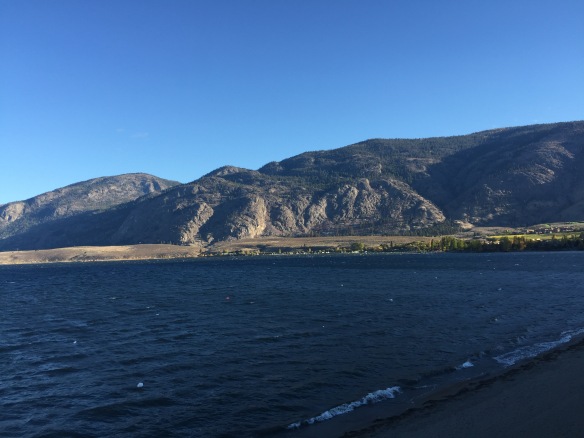 View from our Osoyoos hotel room

Apples outside of Osoyoos

My mother’s paintings lay beside us as we fly through the prairies – stretched out purples, pinks, pale straw, coppery bush, charcoal and frost laid out in grids and patchwork. All under the cover of endless grey clouds, electricity poles like marionette soldiers lined all the way over the horizon. Just when you think you understand the vastness of Canada the prairies give way to the knob and kettle terrain of rolling hills amped up to cartoonish features. Ballooning hills and deep holes filled with water that rise from the previously flat land in no discernible order. It lasts for just forty kilometres outside of Red Deer and then it softens back into rolling ranch land. Just an other feature created by the ice age.

We find refuge in the warm houses of friends and relatives in Red Deer and Calgary who feed us and let us wash and rest and connect us back to the world outside of ole smokey and screen time battles. Staying in peoples homes has become the favourite part of this voyage. I keep thinking of how I would be doing if we had followed our original plan to go overseas right away. I’m not sure I would have made it this long. Having deep and real connections on the road is beyond a blessing it’s been everything keeping me grounded. I didn’t think about being a parent 24/7 – before we left – I mean I joked about it but I thought we would just roll with it. These breaks to let the other parts out of the cage and stretch are becoming some of my favourite memories.

Driving into the mountains and through Canmore and Banff –  “Panda’s!” Sabine screeches as we pass Elk lazily chewing on the grass at the side of the highway. So we know the home schooling is going well. We bid adieu to my home province and begin the climb into the Rockies and cross over into British Columbia and the continental divide. THE CONTINENTAL DIVIDE!! Where water on one side flows to the Atlantic and water on the other side flows to the Pacific! WHaaa. I am still geeking out about that – an other sideline of this trip has been my piqued interest in all things geological. Wondering why the heck did I take Theatre in University? After the big divide we stop to walk Maple Canyon. Similar and equally breathtaking as our familiar Maligne Canyon in Jasper. Again we are assaulted with loud vocal protests demanding to know why we need to walk and what is so interesting about rock and water. I’m trying to read the helpful signage describing how the canyon was formed – saying  isn’t this a more fun way to learn? Would you rather be in a classroom right now? The answer is a resounding yes – he would rather be anywhere but on this hike. We carry on but it’s hard to not let my emotions explode. We end the day at Radium hot springs floating in the hot water and mist between the rock side of the mountain and the black night sky. It is amazing and enjoyed by even our most discerning traveller who had once again transformed into my beautiful, loving and joyful boy ebulliently drifting through the water with his equally smiley sister.

The next night we find ourselves in Nelson in ramshackle house on the corner of a street alive with the colour of fall. Nelson is nestled into a claustrophobic valley the beauty of BC breathing heavily down. The roads twist and turn with steep inclines and declines to the extreme West Arm of Kootenay Lake. More family time with the Lewis side – easy like Sunday morning as Lionel Richie would croon. With no time to linger we push on up out of the valley and further through the interior of BC – have I mentioned – BC is a bit of a show off in the looks department. You might think it’s just a mountain pass occasionally decorated with sandy hoodoos but it opens with wide valleys of fruit orchards like colourful armies ready for battle. There are vineyards and trees of all colours and descriptions. The sun is pure and bright during the day and then diffuses into the palest pinks and blues as it sinks behind the mountains. And suddenly OSOYOOS!!! OSOYOOS where have I been all your life – this valley surrounded by desert coloured hills dusted with brush and rocks. Osoyoos with a long narrow strip of land that splits the lake and is filled with hotels that have water on both sides. Heaven. The purple, pink and peach colour of the skies our water side hotel complete with an indoor water slide and dinner delivered to our door. It was a pretty top dollar night! Even more top dollar when we realized that the steamed broccoli that we ordered from the Chinese joint was $12.95!!! Steep even for Toronto dwellers. B.C. has not been budget friendly but it keeps blinding us with so much brilliance that we are choosing to ignore it.

While leaving Osoyoos Chris and I yell “Osoyoos! I saw youse Osoyoos.” Cementing our colossal unhipness to Anderson. We stop at a farmers market and grab peaches, pears and cherry juice for the road. And it’s still a long road to the ferry terminal – there is a stop at a suspension bridge where we try to do a little learning. It may have been successful there really is no way to know. Kids have a sixth sense when it comes to their parents trying to impart any knowledge. It’s a perfect blue sky day and BC continues to brag all the way through the Okanagan Valley up into the Mountains right through to Tsawwassen and the ferry. It’s a long haul and the kids eyes have not left their screens save for the suspension bridge and a brief Booster Juice treat. Chris has driven the entire time and we still have to get into Victoria find Jen’s Dad’s house to drop the camper off at and then get to our destination – a whole house to ourselves!! Offered to us out of the blue from a friend. The ferry ride was spectacular – the smoothest glass like water, the sunset, the misty islands slowly shading into greys and blacks while the sky softened into the sunset with lavenders and pink tinged blues. And then suddenly we arrive ON VANCOUVER ISLAND we did it! Newfoundland to Vancouver Island as the song sings…. oh no I’m thinking about This land was made for you and me. Serendipitously we meet a young man who starting in June had cycled from Newfoundland across Canada and was closing in on his mile zero on Vancouver Island.

Driving in from the ferry into Victoria is also spectacular and Chris says,” I have a feeling I will not want to leave the Island”.

We have the usual gong show moments parking the camper in a driveway in Oak Bay (a very nice neighbourhood) when the neighbour comes out with some consternation and concern as to what this giant loud truck reversing and pulling up and reversing is doing. I give her my best smile name drop a bit and confirm we will not be opening the trailer just leaving it for a couple of days. She is relieved and reminds us that it is Oak Bay. Job one down, the kids eyes have still not left the screen, we find Allison’s pad – which turns out to be an insanely beautiful executive suite – the main floor of a modern two story on the edge of downtown Victoria with cement floors, beautiful art, deco furnishing and vintage appliances and Leroy cat extraordinaire. We really have stayed at some spectacular joints I didn’t even get into my cousin’s palatial place with sweeping views of the Bow River and a real wood burning pizza oven IN HER KITCHEN! I think the homes we have slept in will make an other great post.

And so begins our Vancouver Island adventure.

The view from Tsewwassen toward Vancouver Island

1 thought on “Into Beautiful BC”