Little did I know when I saw Alejandro and Veroniece, on our arrival, waving us forward and up to our little casita that my most memorable moments would include them. On the second or third day we passed Alejandro on our way out and he told us he was preforming a cacao ceremony later that day. Of course I was intrigued but too shy to ask about it. After a couple of lunches by the pool with the kids playing he invited us to do a cacao ceremony on the property. So the next day we walked through the jungle – pulling aside a barbed wire fence that keep the cows in to find a path worn by the ubiquitous ATV’s that everyone rides around on. They definitely make better time than even the toughest 4×4 truck. We walked on the red dusty road for about five minutes and then veered onto a smaller foot path that led us down to a small creek bed lined with black stones – ropey vines hanging, giant leaves swaying, and thorny bushes we delicately stepped around. There in the shadow of a giant Pechota tree (native to Costa Rica, these trees have bark lined with triangular points almost like barnacles) Alejandro set up three big stones in the shallow water and lit a fire on top of them then placed a large clay pot that he filled with water from the creek. Then he lay out a blanket and placed some instruments on it. His wife and the kids were there along with Sabine and Anderson and we sat, waiting, along the edge of the water on giant roots papered with leaves, not sure what to expect. Veroniece pulled a metal grater out of one cloth bag and a huge hunk of pure cacao out of an other cloth bag and then she proceeded to grate it into the pot while Alejandro fanned the flames with a clutch of black feathers. He explained that the cacao represents the blood of his people and that it connects us to our ancestors. We are to drink the cacao and meditate on a question. When the cacao was hot he passed out hollowed coconut shell bowls to each of us – when Chris passed his along the line – Alejandro stopped him and told him that he had chosen that bowl for him. Then he invited us to the fire and one by one he filled our bowls with the very bitter, and also very hot, cacao water – Anderson burned himself on it….. Alejandro told him that maybe his ancestors wanted him to listen! Ha. Then we drank the cacao and Alejandro sang and played the drum. This went on for some time and then we took more cacao and he played what seemed like a didjery doo. We continued this cycle two more times. It was very beautiful and peaceful and we didn’t even get attacked by any jungle creatures. At the end we collected ourselves and walked back up through the jungle as the sun was setting and the sky turned to fire. We arrived at the top of the hill to the pool where we immediately jumped in and floated as the sky bruised into twilight. A further stroke of luck was having pre ordered some pizza from Lory – she delivered it to the pool house – two huge pies, thin crusts, one loaded with thinly sliced vegetables and olives the other with just cheese and prosciutto. We ate them under the darkening sky and then sloshed home to crawl into bed.

I am feeling so lucky that we stumbled upon this place – just so perfect for where we are right now in our travels – there is some community along with some really authentic experiences – our own space with room and rooms. There was a second pot luck by the pool with the same expats and some new friends – there we learned about a little restaurant run by an Argentinian man – the restaurant is tiny and only open Thursday through Sundays – we were advised to go Thursdays when we could have the most choice. So we booked a table – actually Chris forced me to call and book a table reading from google translate. Luckily after I stumbled through Frederico, the owner, took over in English. We arrived to find a small house about 500 feet from the beach in Marbella – there was a huge oven with a crackling fire and glowing coals swept under a grill, four small tables and a smiling Bettina, who we had met at the first Italian lunch, to be our server. Frederico had built the Asado himself and cooked just what he wanted – Argentinian style – he moved to Costa Rica 20 years ago to surf and has carved out a perfect life for himself. Everything was delicious. Simple and fresh with herbs, garlic and oil and of course delicious chimi churn sauce.

Christmas is coming – I only feel it when we drive along the dusty roads and see all the little houses decorated with the most garish tinsel and lights – small Christmas trees sitting on the front porch. We have decided to make some necklaces and decorations from the shells we have been collecting so Chris asked around to find someone who works with leather – there are lots of farms around – at least there are lots of fields with cows in them so he thought we could find someone to cut us some leather. I was super sceptical but Chris did it – a sharp turn off the highway led us down a narrow road to a small house with some saddle horses out front and a peacock painted on the wall. Chris poked around until a woman came out and then a small girl – we tried google translate to get across what we were looking for and then out of the blue a man rode down the laneway on a motorcycle – it was Memo the leather worker and he proceeded to show us his workshop – under a corrugated tin roof at the side of his house. It was filled with saddles, rolls of leather and sharp knives. He also made leather horn covers for the bulls because there is a running with the bulls in Santa Cruz and so many people get injured (mostly gringos) that they now try to protect people by covering the bulls horns. He sold us the leather strips and we managed to also buy a pocket knife holder – to give to Anderson for Christmas – without Anderson seeing. I’m realizing that Christmas is going to be tough – we are never without the kids and we also really do not need anything these days. I’m not certain how it’s all going to play out. With Christmas and gifts in mind we set out the town of Guaitil, known for it’s pottery. The Chorotega Indians from Guanacaste region are renown for their pottery and the small village of Guaitil is mostly houses with pottery shops in the front and huge kilns to the side. Of course the first shop we find is filled with beautiful pieces, some more modern and some replicas of pre Columbian styles, I pretty much want to buy everything but Chris is level headed and says we should do a little more looking around. The next pace we check out is smaller with fewer pieces – but the man inside introduces himself to us and offers to show us how he makes his pottery. I thought it would be a little two minute ramble but he goes through everything – from digging the clay in the mountains to digging the pigments and drying everything – using a huge mortal and pestle to pound the ingredients – mixing the clay and then mixing the pigments. He sits Anderson down in front of a small hand turned wheel and he sits beside him and tried to teach him pottery. Anyone who has ever tried a wheel knows how insanely difficult it is. But, Wilson, takes his time gently guiding Anderson’s hands – then he makes two pots while Anderson mangles numerous lumps of clay. He takes us out back to see the kiln and where he gets wood and water. The entire experience is about an hour and a half – so of course – we want to buy one of his pieces and we decide on a beautiful mug….. which turns out to be $40.00 American……. which I decide is a good price to pay for an hour at the wheel.

Our time at Ca Di Roc is ending and I feel sad to say goodbye to our little casita, the beautiful pool with the curving wooden bar under the pool hut. I love the view we have over the jungle out to the mountains – the hills dotted with cows and sounding of birds and howling monkeys – I’m even sad to say goodbye to the two black velvet bats that hang on the wall outside the door every morning. Chris and Anderson spend the second last night at a sweat lodge on the beach with Alejandro and our last day on horseback with him. Sabine and I play by the pool making jewelry and Christmas decorations to share with the family on the next leg of our Costa Rican adventure

FInally the morning comes – I wake up early to sit in the swinging couch on the balcony and watch the sun come up over the jungle. Then we make the rounds saying goodbye to our new friends – Alejandro and Veroniece, Niko and Lory -they give us gifts – a piece of boa constrictor skin/hide – that Alejandro cured and a dream catcher that Lory wove. Finally we hit it – careening over the now familiar gravel road through Marbella, past the mini super where we bought our food, past the low bright concrete houses hung with tinsel, past the little soccer pitches and upturned tire seats, past the hammocks swinging gently in every yard, past the workers walking along swinging their machetes we keep following the road as it leads us through small creeks, over one lane bridges and into Nosara. The Mecca of wellness has a thin coating of white dust over the road, ditches and trees lining the way – almost like construction dust which it probably is the way Nosara seems to be springing up with new and fancier digs around every corner. It looks almost Christmassy. We come through the other end to finally catch up with the paved highway – such sweet relief to not have every bit of fat on my body jiggling along with every stone on the road. It will be smooth sailing to Uvita.

Why even attempt a “selfie” I’m never alone. 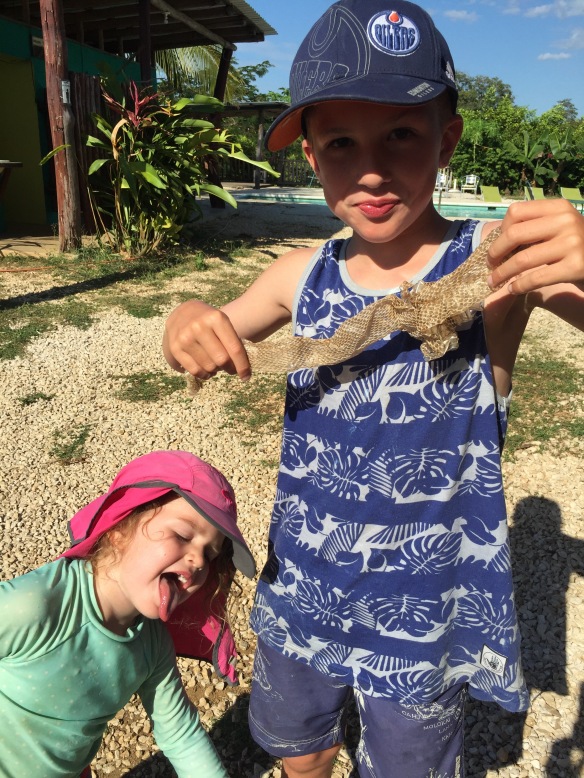 Found a snake skin – natural reaction from the Bean 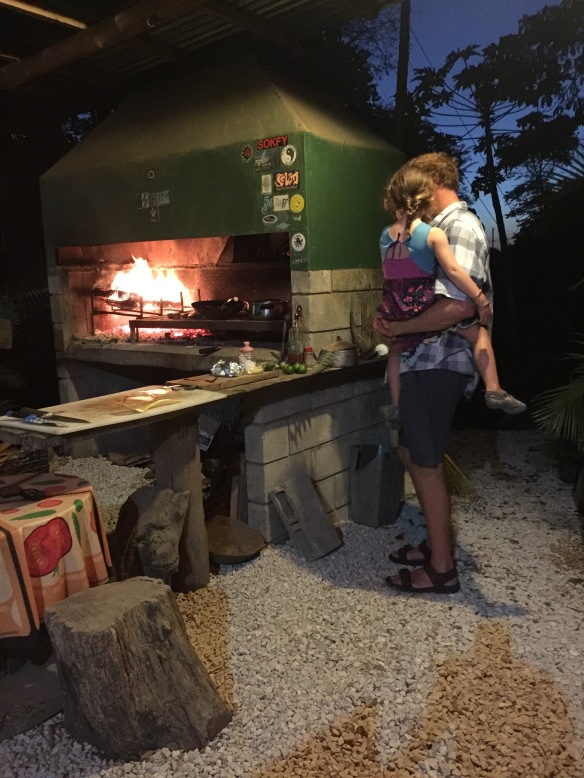 Checking out the Argentinian asados that Frederico built

An other favourite view of the pool

Chris sneaks in a sunset workout 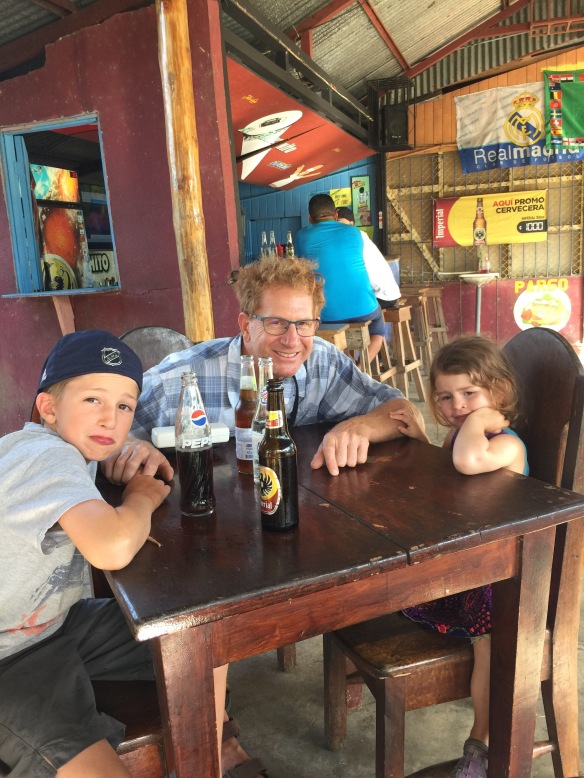 Roadside eats at the Soda 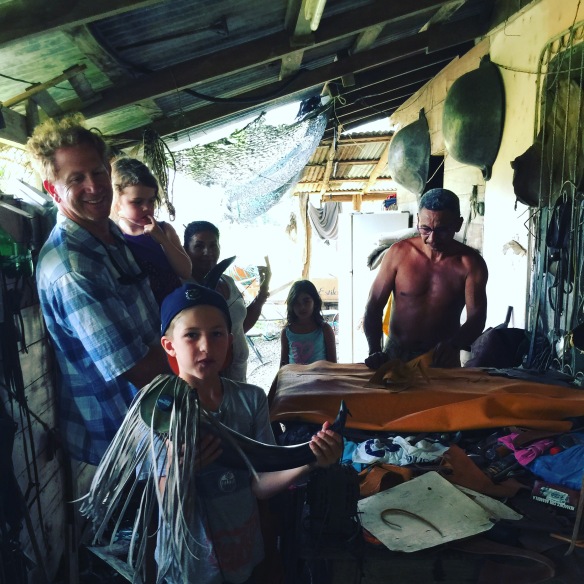 With Memo the leather worker – Anderson holding a horn flask

2 thoughts on “Machetes and Hammocks”