It’s my birthday and even though I can’t even manage the number on my life dial I feel really great. I always feel rejuvenated after meeting with my goal group women. Even if it’s just virtual. I was able to articulate what I am passionate about doing even though I don’t have a clear plan toward it. I realize this travel has impacted me and is changing me even though it feels like a treadmill of fights and recriminations. I want to lean into this time with my kids – it has felt so overwhelming day in and day out to keep them occupied and learning and happy. I feel like I have failed so much of the time and I don’t know what their take away will be. But it’s okay. We are together. I am so lucky to do this so I will enjoy it for all of us. I’m just going to break down our return into manageable bits. Three month increments. Until then I’m going to enjoy every free day. I’m going to let go of the frustrations. I’m going to go back to loving my kids unconditionally. 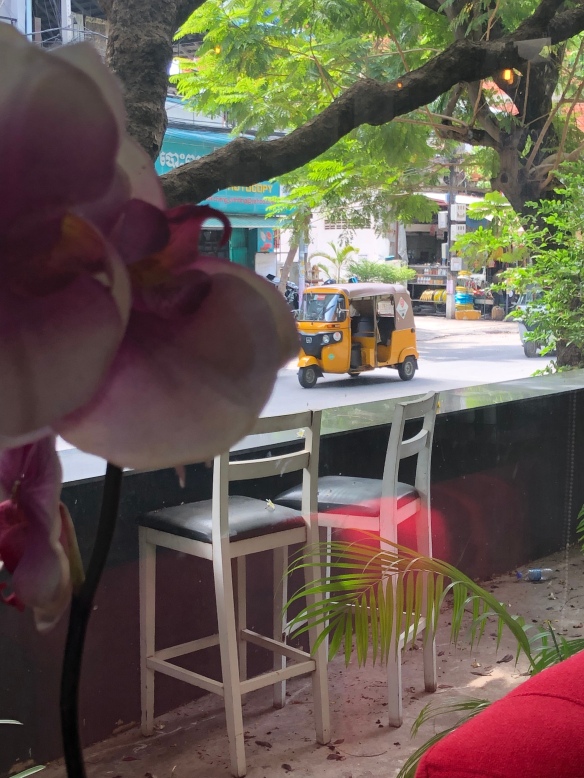 View from Breakfast at the hotel in Phnom Penh 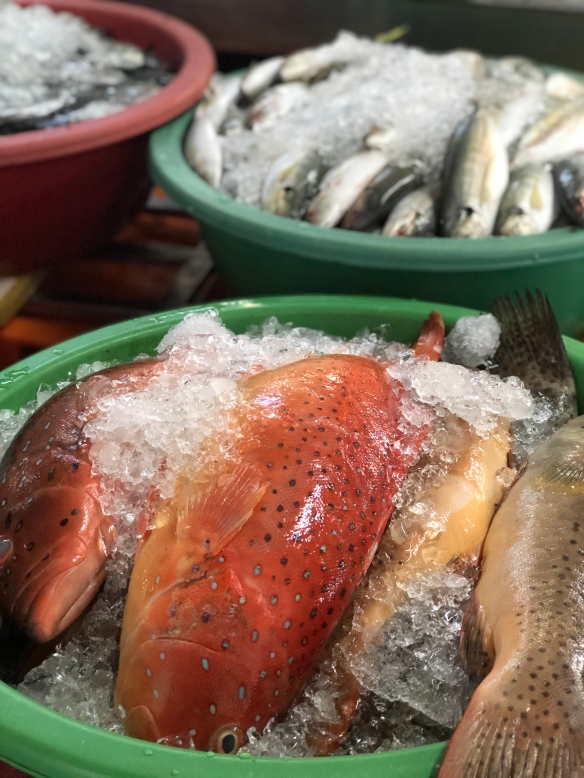 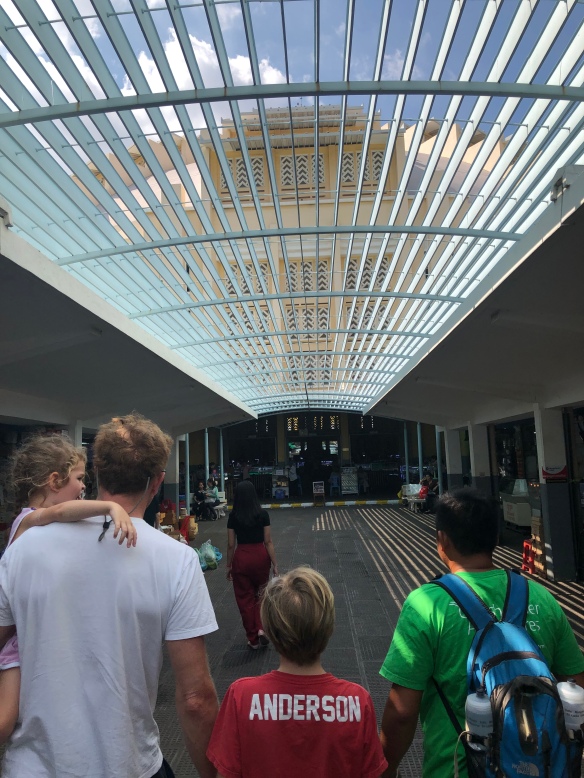 Walking up to the central wat

Guide photo with all the feet and a crane 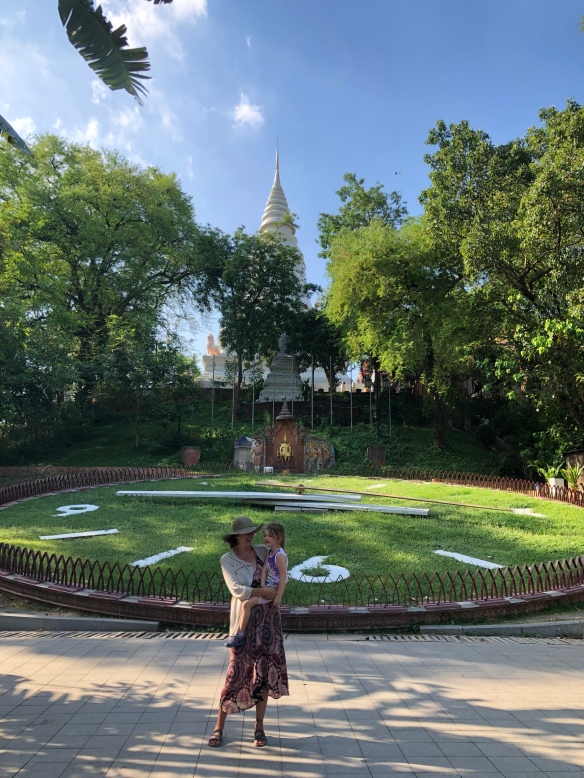 Beanzie and I at the big clock 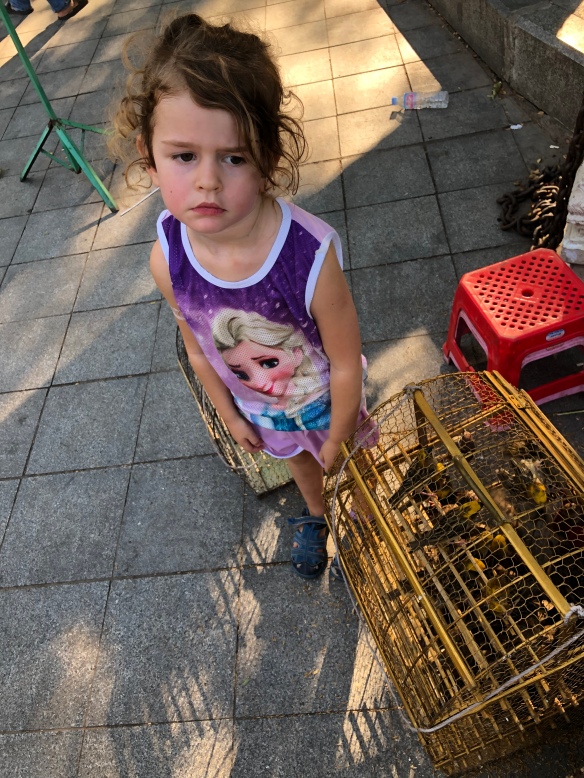 Bummed we can’t get a bird

Offerings for the temple

At the Royal Palace 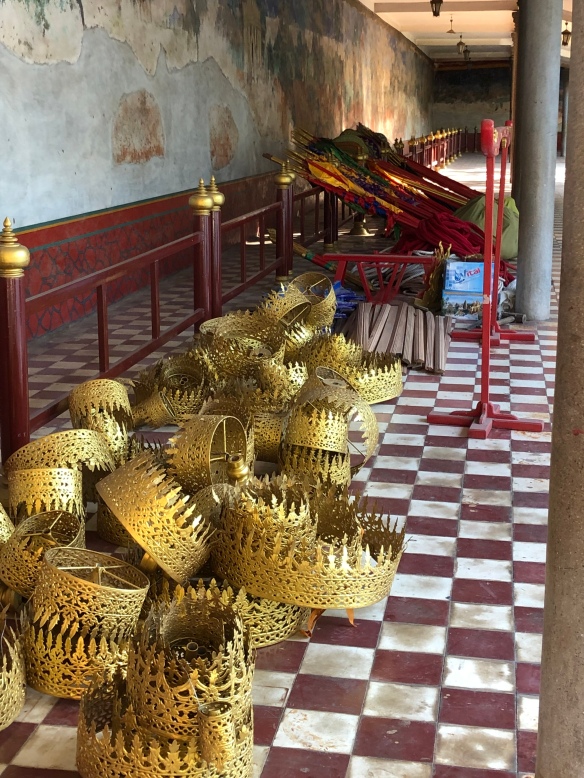 Prep for a big celebration with the king the following day 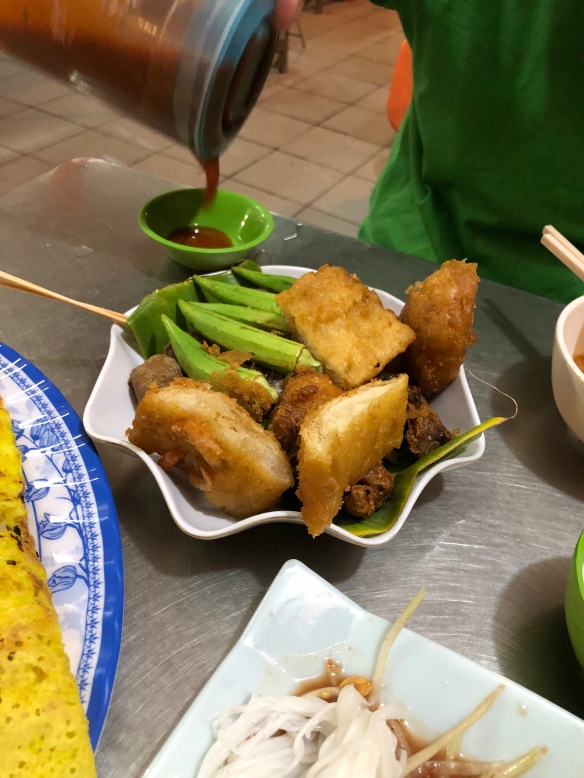 That night Anderson is feeling better so we go see a dance show. I’m a little hesitant because the water puppets weren’t a big hit and the Thai dance show ran a bit long to hold the kids interest. But this show is amazing. The performers are incredible, the costumes and Apsara dance is so beautiful. It’s evolved from Hindu ceremonies and dance and this company is taught by a former Prima Ballerina from The Apsara ballet who almost single handedly helped revive the art that was all but wiped out during the war in the 1970’s. This company was founded by a man who’s intention is to put musical instruments in children’s hands instead of the guns that were put in his hands. They have evolved over the last 20 years to reinvigorate and revive art forms lost during the war and starvation period that followed. They mentor writers, teach poetry, art, dance and music. It was a beautiful show that enthralled Sabine and kept Anderson laughing. A great night.

The next morning we were up bright and early for a cycling tour of the villages surrounding Phnom Penh. We decided to take the tour with Grasshopper the same company we used in Vietnam. This tour was not quite as polished – maybe reflecting how Cambodia is still more rough around the edges. Again the heat was insane! It felt like cycling through an oven with the breezes blowing dry and hot while we were drenched in sweat and humidity. Our stop at a cafe with a silk worm farm and weavers was beautiful but so so hot. No fans, the water bottles were barely cool and the expansive array of fruit was hot – well fine room temperature but actually hot. Annoyingly when we returned from the oppressive back room after watching silkworm wriggle around on some green leaves I discovered our tour guides drinking from giant take out cups – like freaking big gulps – filled with ice and some kind of juicy looking drink. Rude. We then hopped back on the bikes to meet some lemongrass farmers, tamarind farmers and cycle through a banana plantation, we crossed the river at three points and finally were greeted at a van with cold towels and cold water and driven to a lunch spot. Obviously my favourite part of any excursion is the eating part. It’s so much fun to sit down with regular folks and eat what everyone else eats. Although I’m sure we got the “tourist” version it was still pretty tasty! We were back at our hotel by 1:30 where we all passed out for an hour in air conditioning. I have to say being able to cool our core temperatures down is invaluable. Even more amazing than the heat are the clothes that normal Cambodians wear! Hoodies! Long pants! Sleeves! Socks! Unbelievable. 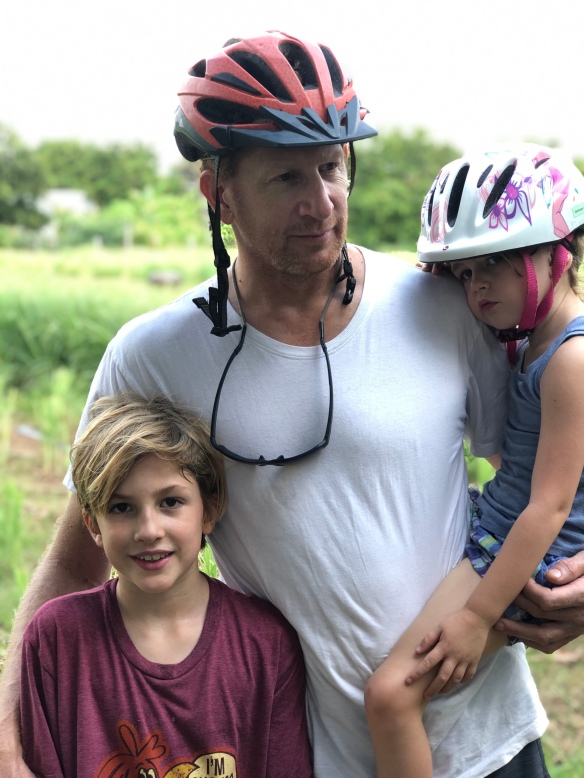 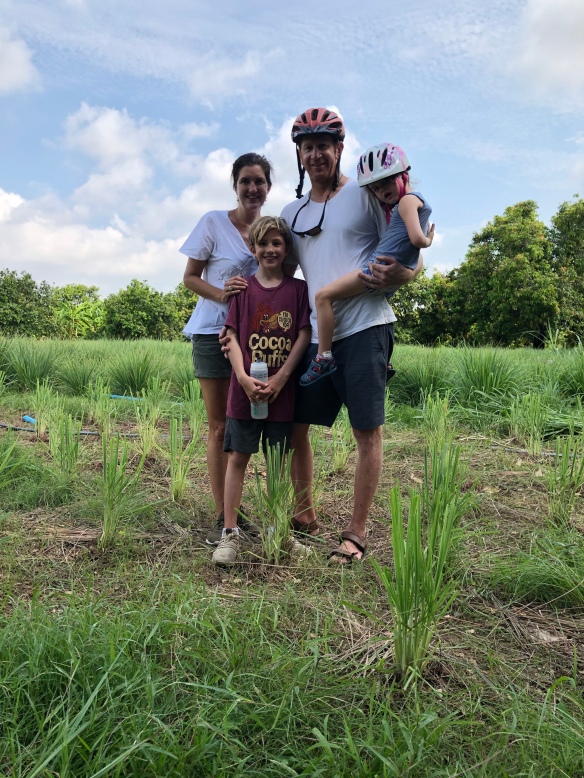 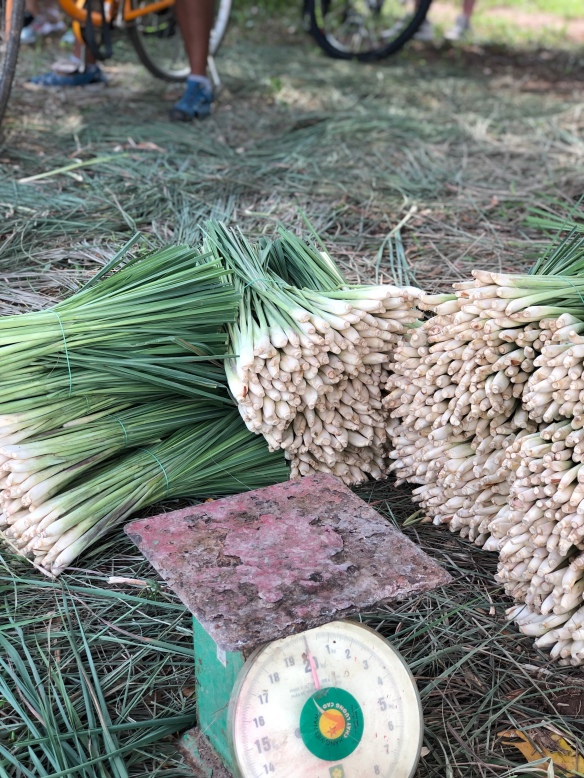 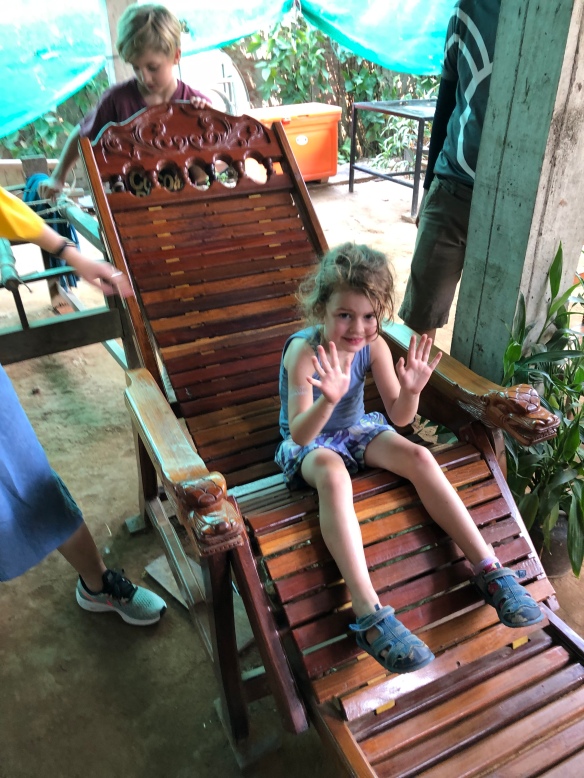 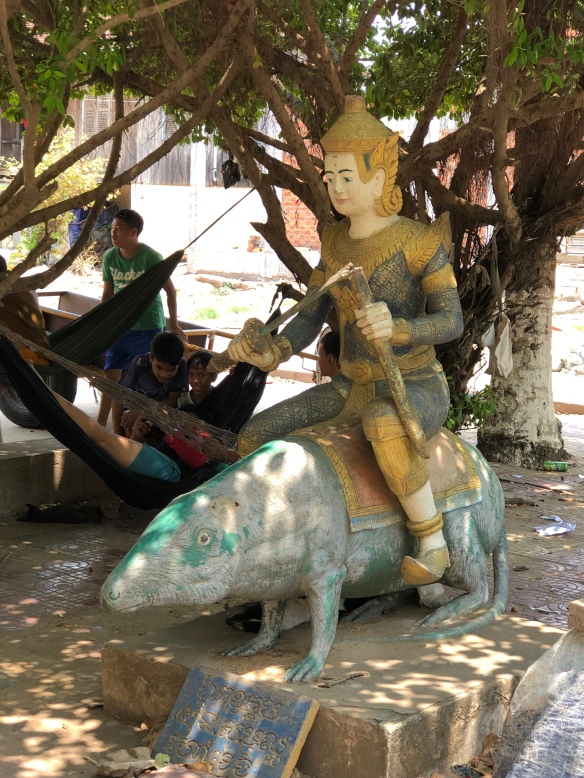 The gods and their animals 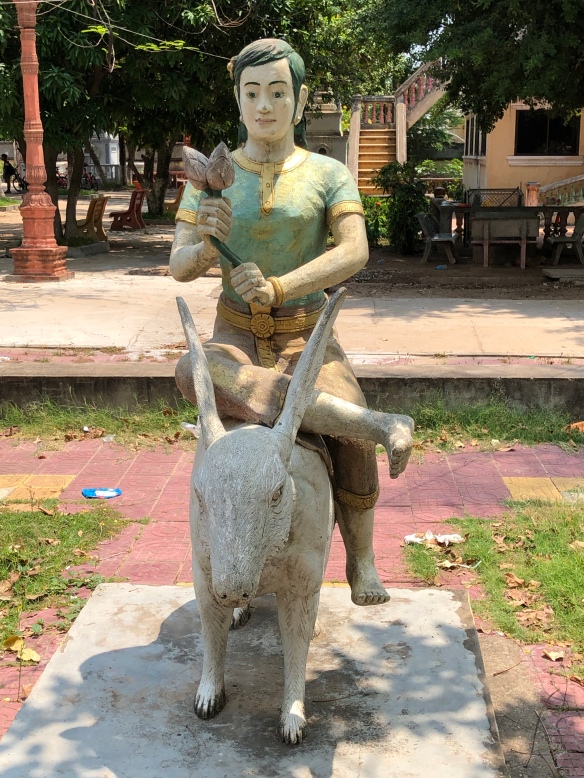 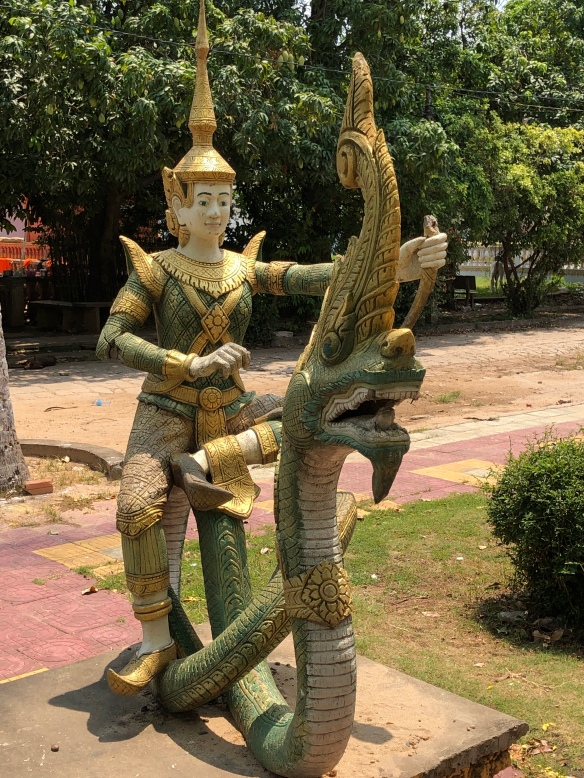 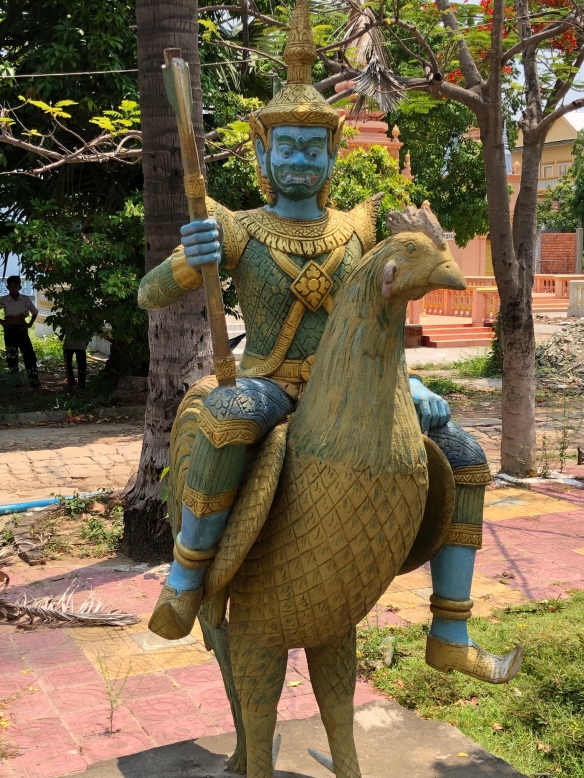 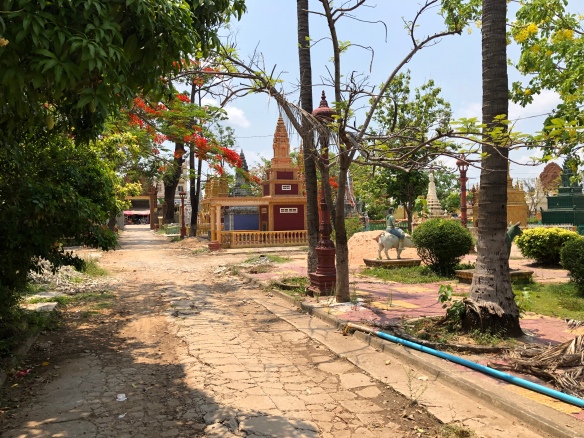 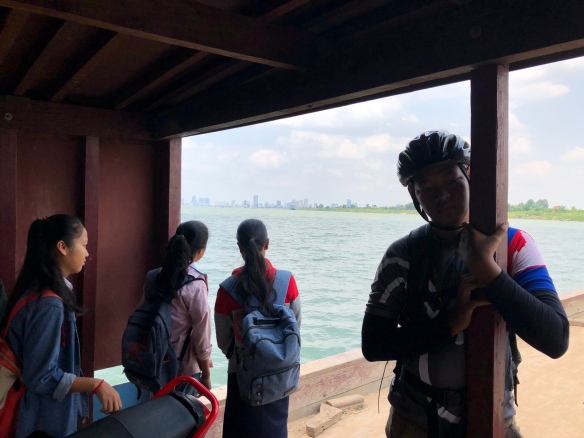 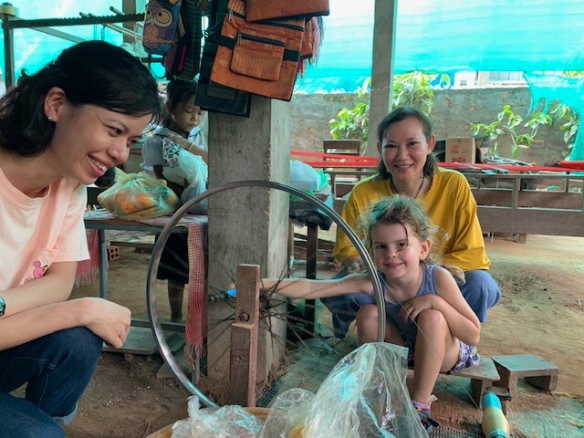 We only stayed in Phnom Penh for three nights – our hotel along with being centrally located was also crawling with giant cockroaches – they sprayed every morning and collected the upside down leg curled carcasses frequently. But we saw them and had to remove a few from the room. Just part and parcel of being right in the action. Phnom Penh is big and very smelly. More garbage than anywhere else we have been and the smells are intense as it seems garbage can just be left where ever there is already a bag. We saw rats and bugs on all the streets. Although not in the actual restaurants so Hoi An has Phnom Penh beat there. I was happy to get into the Giant Ibis bus that was heading to Siem Reap. Angkor Wat has been on list of must sees since we started planning this trip. I can not wait to get there. We actually booked a sunrise tour for the morning after our arrival. We have learned the key to keeping the kids happy and us learning is to have a good tour guide but to also have an air conditioned taxi and lots of cold water. We found a tour that has all of those things – plus great reviews and a schedule of temples opposite of other companies to hopefully ensure a less packed experience.

From the bus on the road to Siem Reap 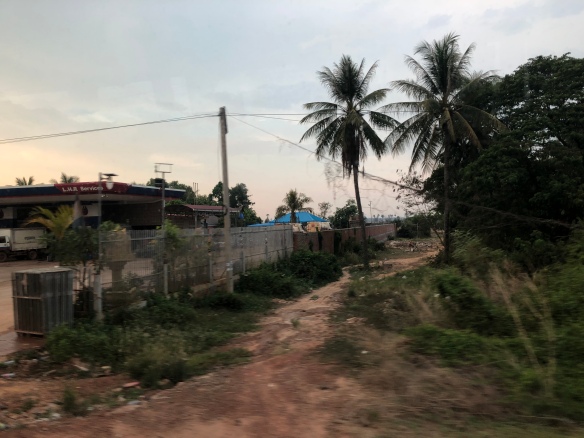 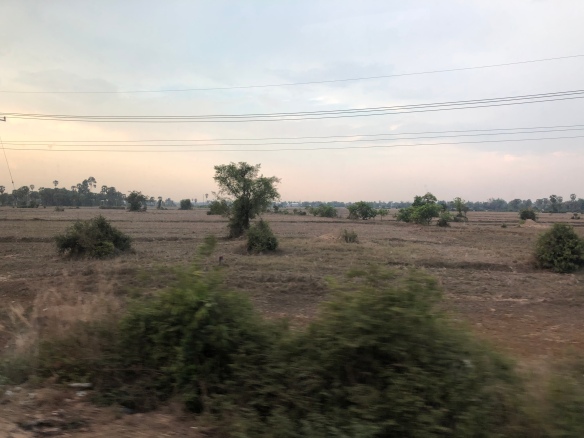 The view from our balcony in Siem Reap 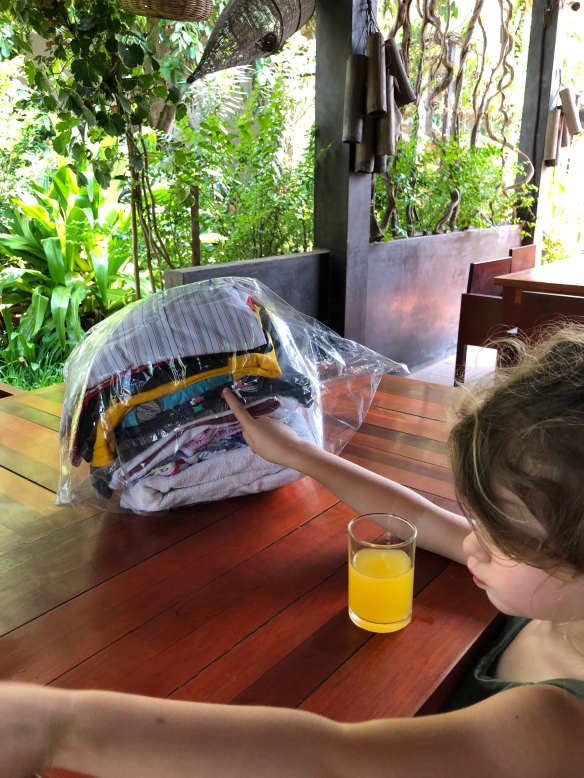 Nothing is better than clean folded laundry – that I didn’t do!!!

An hour into our five and a half hour bus journey – Anderson got sick again. This time he spiked a fever and horrible headache – he moaned and slept and moaned for the remainder of the trip. We arrived and his head was hurting so badly that he threw up. Luckily into a plastic bag. But it was one rocky rocky tuk tuk ride. On top of the fact that we discovered our tuk tuk was being held together with a little glue and some well wishes Sabine had had to pee so badly when we got off the bus that she had dribbled a little in her underwear and was now loudly announcing that was my fault. So between her high pitched complaints, Anderson’s moans and the time we had to stop the tuk tuk to retrieve our bags that had fallen off into the road after the side of the tuk tuk had given away on a particularly big bump, it was an anxious ride. And then totally out of the blue Sabine tried to pat Anderson to help him feel better but ended up actually poking him right in the eye. Not our best ride. Finally we made it to our little oasis just outside of the city centre. Sometimes it’s really worth it to book the bigger nicer room and prettier hotel just a little out of the way. This has worked for us here since we are now on day two of being trapped here with a sick kid and a bandaged kid. Sigh. Luckily we were able to rebook our sunrise tour of Angkor and tack on some days to our time here. Fingers crossed we can make an excursion out tonight. We have tickets to a “circus” show – an other company that works with youth to revitalize the arts. 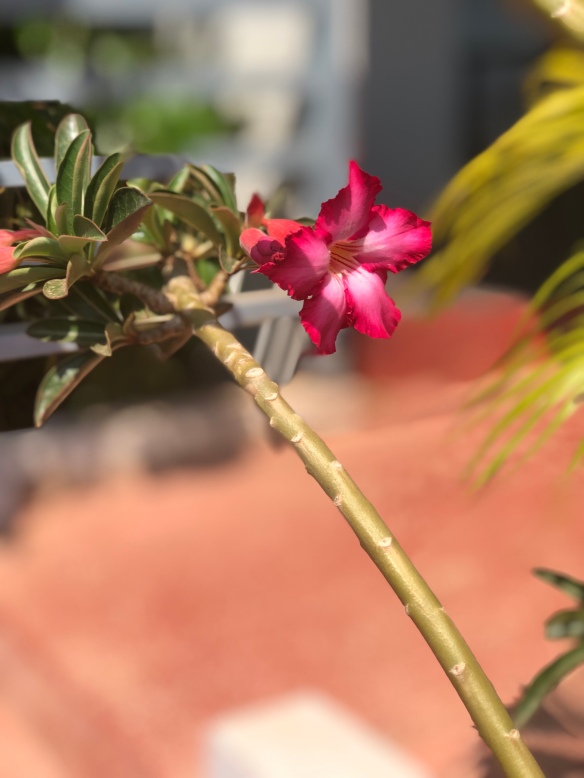