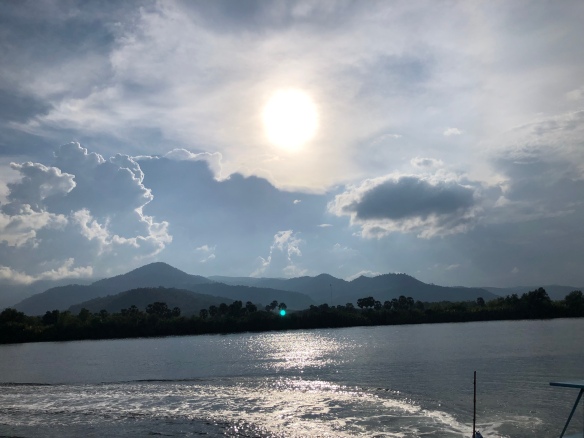 The days are drifting dreamily by here in Kampot. This is a true expat haven. It explodes on the weekend with working expats from Phnom Penh and meanders gently with retired expats during the week. We have met a few families who have decided to raise their kids here, preferring the free range parenting, it takes a village style. The expat necessities, like housing, food and beer, are cheap. More than cheap the food here is amazing – Kampot has drawn in a large number of chef’s who just want to live a simple life, cook with passion and exit the rat race. We have read this on countless menus – introductions from chefs explaining why they have chosen to live and cook here. We have eaten some extraordinary food – Japanese, Italian, French and Indian and are resisting the urge to return again and again to the same spots because there are just so many tempting choices. The only downside is that the Khmer food is not the best. Anderson and I took a cooking class that turned out to be a little disappointing – we did learn how to make amok (delicious fish in coconut milk and curry steamed in banana leaves) and beef lol lak (lime and pepper spiced beef with onions) but they used store bought sauces like ketchup, oyster sauce and sweet chili sauce. A French expat gave this opinion – a lot was lost in the war and many traditional ways were lost. He thinks there are chefs in the larger centres that are trying to bring back the more traditional ways of cooking and spicing but mostly people go for ease. All the food carts and stalls use premade sauces and dried Raman soup noodles. 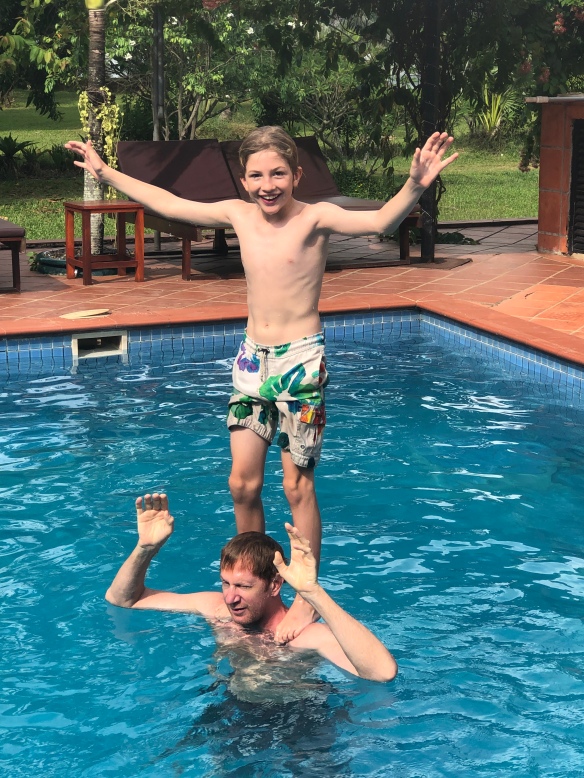 Playground with a few missing pieces 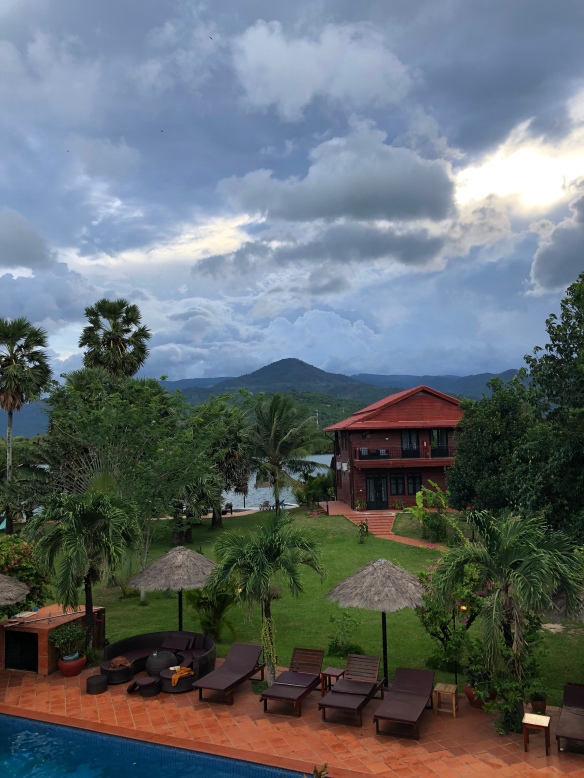 The view to our room by the river

People are exceptionally friendly, helpful and nice – you just have to get used to the slow pace of everything – I think it’s the heat. Many hot climates seem to produce cultures that are not in a rush. The usual dirty underbelly of old white men with young Cambodian girls/women is here – although to be fair the women seem slightly older than in Thailand. The men are the same – at least the most obvious ones are – white, English or French speaking, aging or of retirement age and usually nursing a fifty cent draft in an open air cafe accompanied by a younger woman much better dressed than he.

This expat artist from France told me he was contemporaries with Toulouse – Lautrec…… um?

ride into town with Bunbun

Colour after the rain 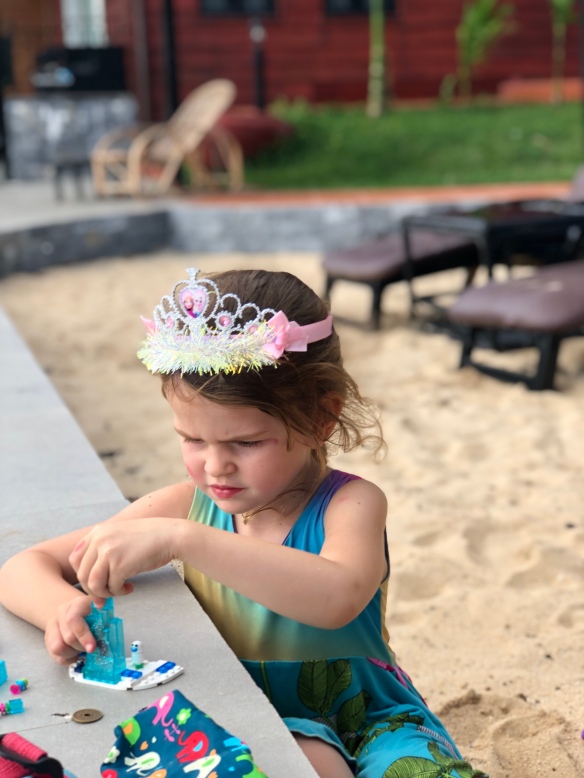 Building on the beach

Durian round a bout in Kampot city

It’s very easy to get around – by that I mean that tuk tuks are plentiful and always cost around $3.00. The roads on the other hand are a little more challenging – not as budget gravelly as Costa Rica but dusty and bumpy. We have a pretty good thing going here – nice resort with free rides to the kiting spot available everyday. There is a small playground next door. There are two pools one with a small slide, the other with floaters and they are both actually refreshing. The restaurant provides endless plates of rice and mango available to Sabine who is eating a 💯 mango and rice diet broken up with occasional scoops of strawberry sorbet. So I am definitely winning as a mom there. Chris and I have may even drift into the next level of marital intimacy – chin hair plucking. The lights here are beyond dim and I haven’t had my own car for almost a year – that was the best light for getting the job done. Growing closer together all the time.

We made a light lunch 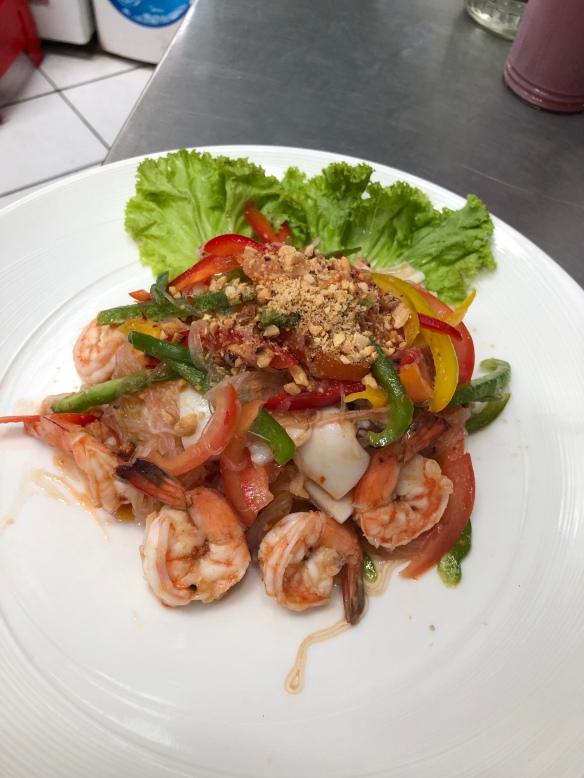 Pork and eggplant cooked and plated by Anderson 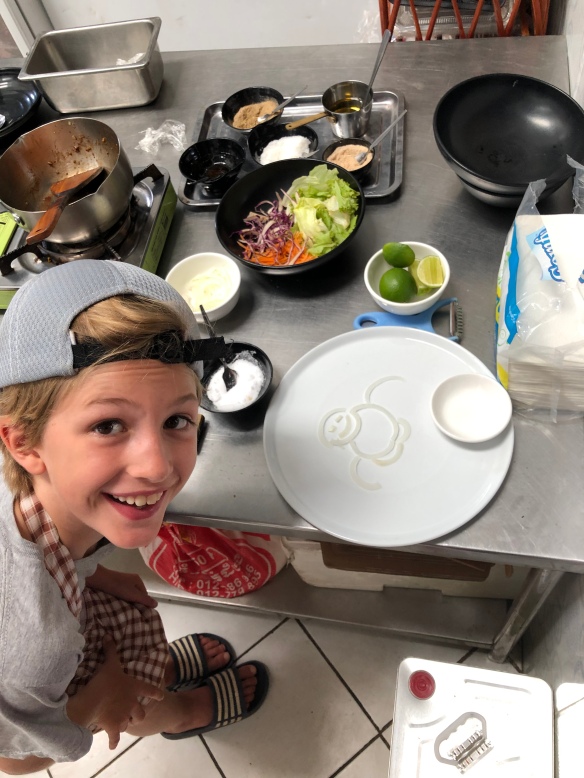 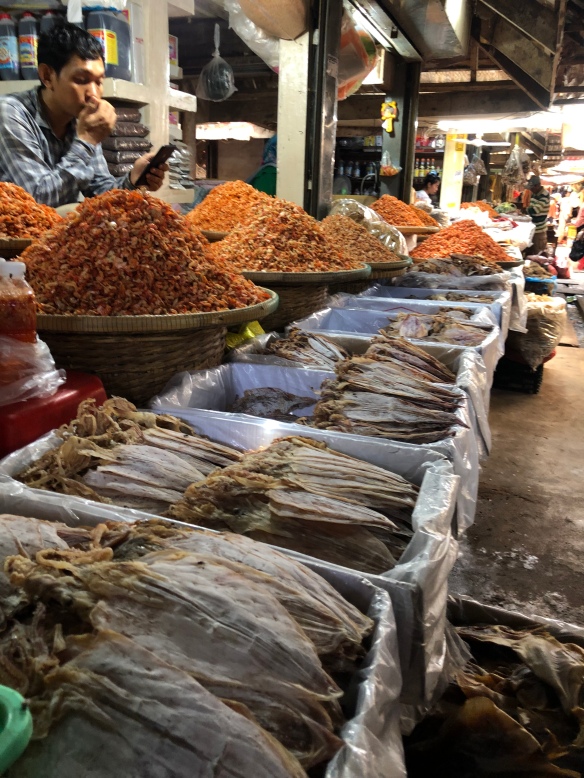 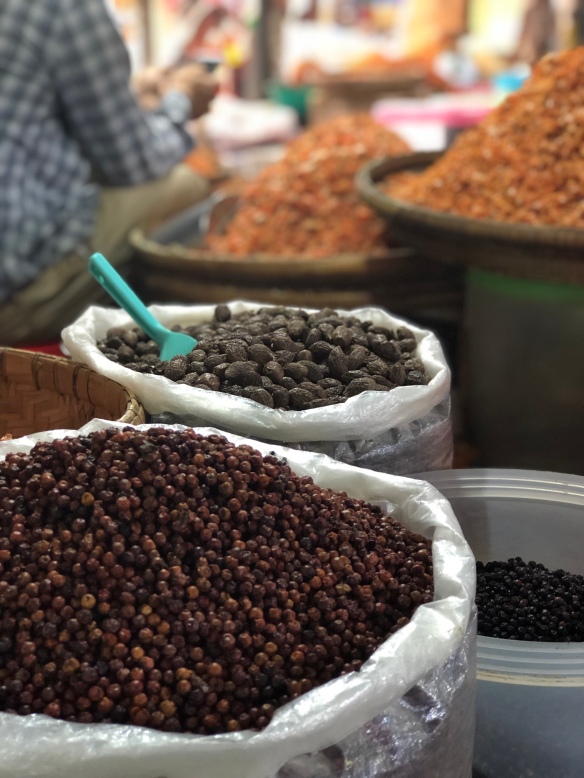 Truthfully we are all loving Kampot and the rural quiet and beauty. The light and the sky changes dramatically and keeps me captivated. We are however still in a two step forward one step back with Anderson. He loves being in a country environment and he loves kiting. The kiting has been going so well that we are extending our time here further until our visa runs out at the end of the month. This last weekend a wonderful family from the states who work and live in Phnom Penh were at the hotel for the weekend. They had a boy Anderson’s age as well as two girls willing to play with Sabine. What a great break. It was heaven for a day and a half but then because it was a weekend Anderson was able to talk to his friends from Toronto so suddenly he didn’t want to go out with the new friend – named Emerson. I tried to talk to him about it but he just refused. Then after Emerson left he was in a bit of a funk. It’s been a fighty and unpleasant few days. Chris is good at helping me keep my temper at bay and keeping things moving in a positive way but it’s incredibly draining and I feel like I am failing. I just so don’t want him to miss out on the opportunities we have but at this point I am tired of having him around when it’s against his will. It feels like he won’t ever just suck it up and carry on – it’s always a tirade of anger – the best pre teen anger – everything is dumb and boring and he won’t ever need to know about it. What does history have to teach anyone? Although at the same time Chris and I have recognized and acknowledge that we are where we are – we have what we have available to us and it’s not going to be what Anderson wants right now. So we will let him talk to his friends until the wee hours of the morning – we will let him play fortnight and other games. Chris will take him kiting as much as possible. We will try to help him self regulate through it all. Through it all I have been reading so many family travel blogs and “world school” blogs and I’m feeling such a disconnect there. It’s all sunshine and roses with people describing how much their kids loved learning about ancient Greece and were so thrilled to walk through the ruins in the burning sun. How they just love being able to school their children their way and to be able to spend all their time with them. No one ever talks about the difficulties or challenges that full time travel present. But that’s social media for you. Maybe I focus too much on what’s not working instead of the things that are working.

Helping her get the feeling of kiting 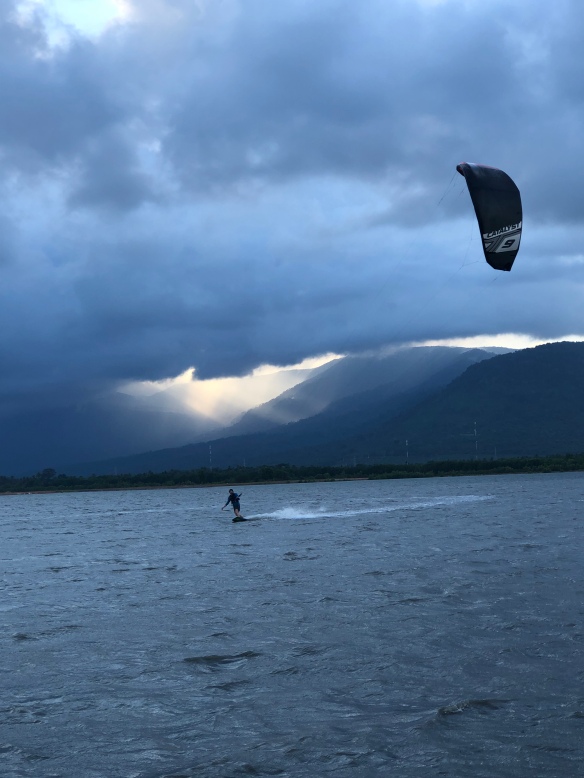 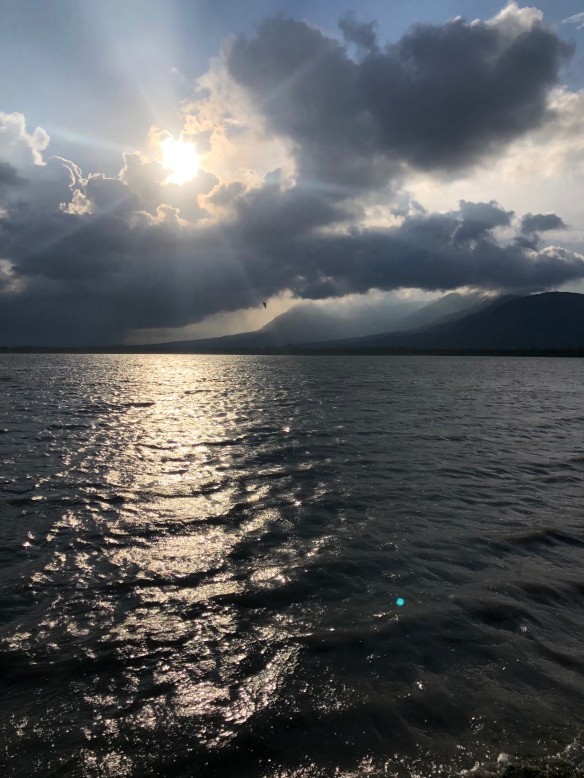 Huddling in the wind 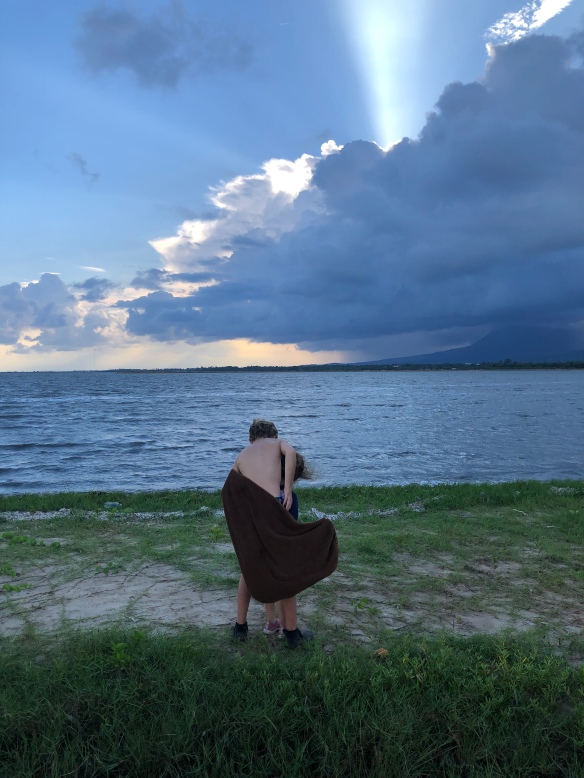 Some more of that dramatic Kampot sky

Fishing boat in the sunset

One of the dining boats going past our dock