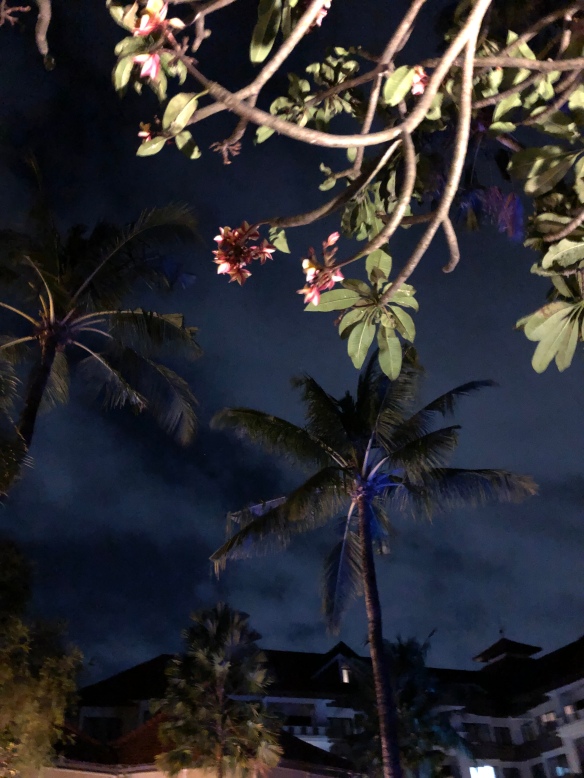 Bali time flew so fast I almost don’t even know how we got to be on this speed boat hurtling across a body of water, whose name I can’t remember, towards Lombok. Bali passed in the blink of an eye. Right….the body of water we are currently skipping across is the Bali Sea and we will make a few stops at Gili islands before we will arrive on Lombok.

The metaphor of speeding across the water as we head into our final months of this trip is loud and clear.

Time has sped up as it does nearing the end of a vacation or between birthdays as I age. We are in our final two months and I feel like I haven’t scratched the surface yet – right along with looking forward to a little routine and autonomy.

Beautiful beautiful Bali I didn’t even get to see a tenth of what there is. We plunked down in the family haven of the Prime Plaza Suites in Sanur for nine days of kid centred activities. It turned into more of an Australian escape complete with a final night of cheering on the Adelaide Crows as they beat NSW in Australian rules football. A game that closely resembles what I look like playing any type of football – a lot of fumbling and tossing the ball sideways. The resort was filled with Australian families and we met a great one on our second day. I was floating with Sabine in one of the kid pools. One entire side of the resort was dedicated to children’s activities with a water slide, various shallow kid pools, an outdoor playground with swings and a seesaw as well as an open air covered play area with pool tables, ping pong, darts and video games. They have attendants and organized activities like face painting, tug of war and scavenger hunts. This wide open face with bright blue eyes, dark lashes and blond hair popped up beside me and started talking. He introduced himself and didn’t stop for about an hour, questions, queries, comments and stories. Mick is nine and from Adelaide. He was at the hotel with his sister Tatum and his mom and dad – Shan and Roger. Soon we planned a surf morning and a trip to the water park. We had dinners out and afternoons lounging while the kids played. 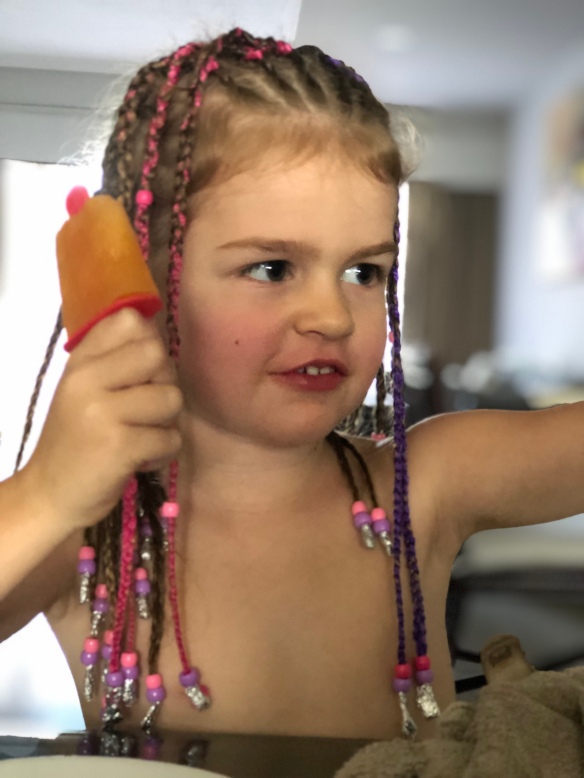 Day two we got the homemade popsicles going

Frustratingly, even with all the amenities and distractions and kids, we still faced some of the same struggles with the screen time and not wanting to join into our planned activities. It was to a lesser degree and with other parents to share with and I think I was finally able to see that the struggle is not unique to us nor is it solely brought on by our travels. 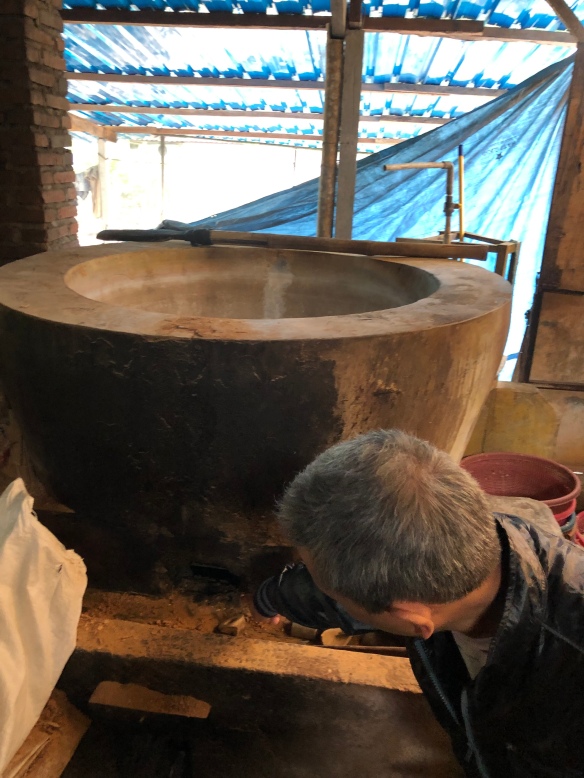 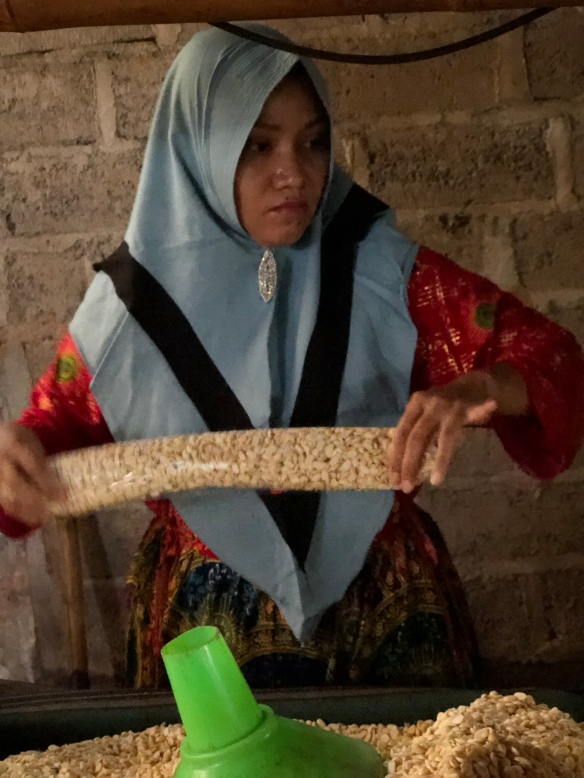 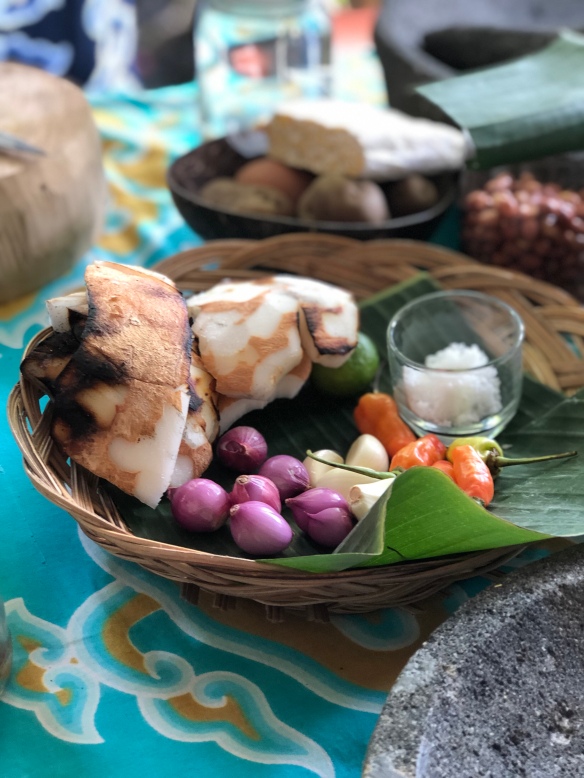 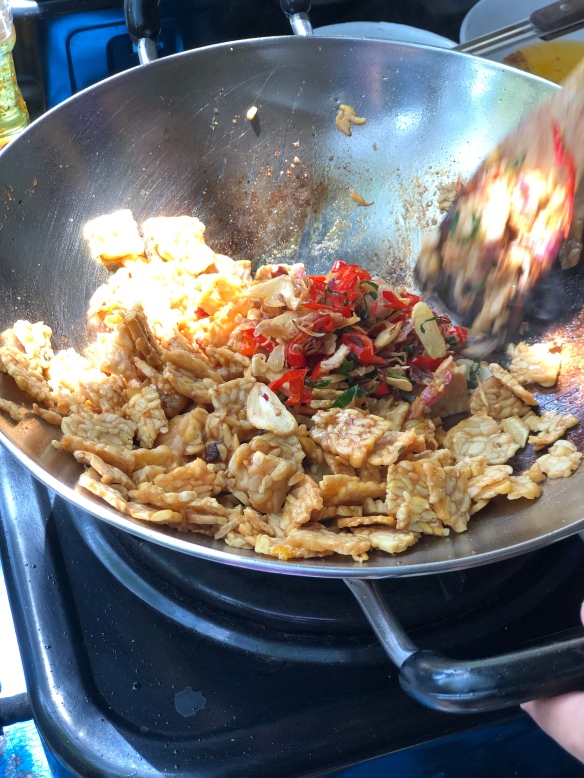 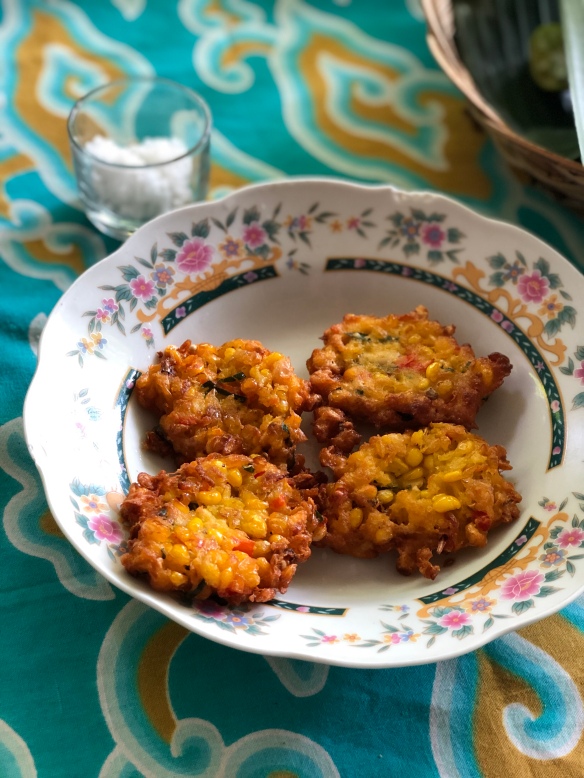 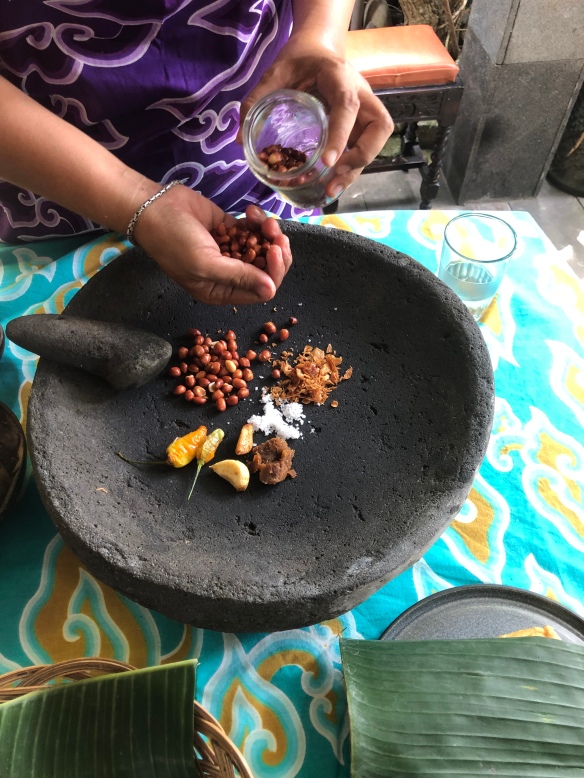 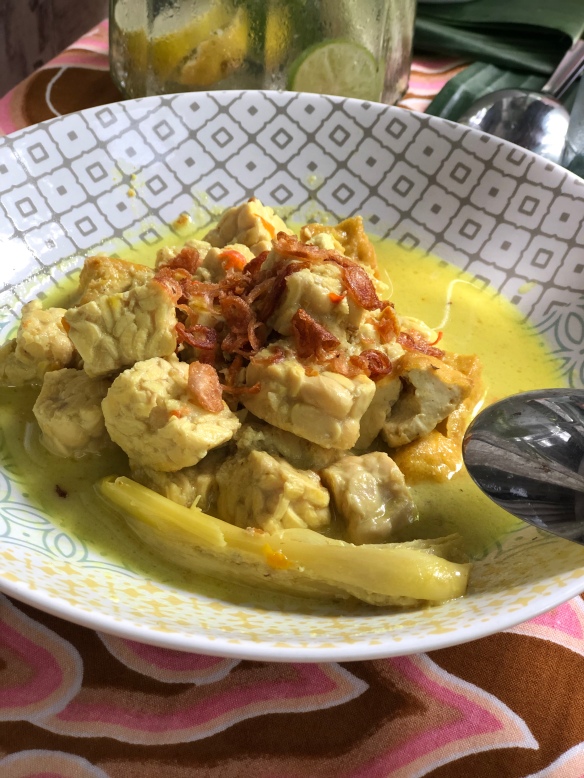 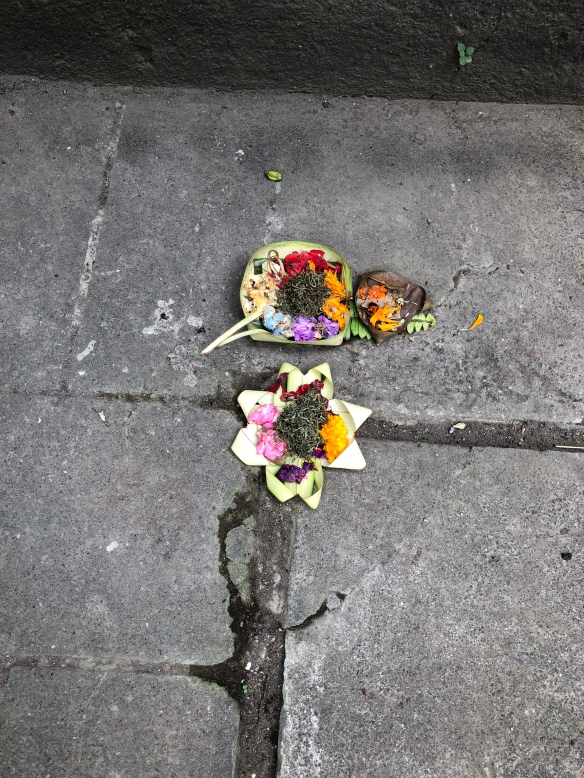 The next day we hit the beach with our new best friends for some surf time and then Anderson and I grabbed a cab to our Graffiti Street Art Class in Canggu. It was a very long cab ride despite actually only being about 4 kilometres away. Bali, especially around Denpasar, Sanur, Kuta and Canggu is densely populated with narrow windy roads that seem to go in circles, the streets are lined with Billabong and Huxley surf shops, colourful sarong stalls and all manner of trinkets and souvenirs. It actually made me feel a little claustrophobic. We found the art studio – a turquoise blue wall spray painted with ethereal and cartoonish mermaids surrounded a little courtyard and a squat building adorned with the same mermaids and bubbles. Inside we found Patrick, an expat from France, wearing a sarong his curls wild and a few patches of beard on his face. He built the studio a few years ago where he now makes his music and teaches art there. He showed us the basics and then we were off on the back of his scooter to the beach. There we discovered the remnants of an art festival a few weeks past. A huge octopus made from wire and bamboo was a gate to the sand and water populated mostly by locals with fishing boats and little huts at the top of the sand. Patrick slapped a coat of black paint on the wall of a hut and we sprayed away. I had a loose idea of what I wanted to do that involves a maple leaf stencil and negative but unfortunately we left those things behind so we just freehand drew. The result was pretty cute and we had a blast doing it. We got home to find out that Sabine had four stitches in her head from a swing wipeout – her and. They had spent the afternoon at the hospital! They don’t use disintegrating stitches and because it was on her head they could use a bandage so they tied the gauze with the ends of the stitches – leaving her with a big white gauze pad and some black string on the top of her head. She also needed yet an other course of antibiotics and a latex swim cap. 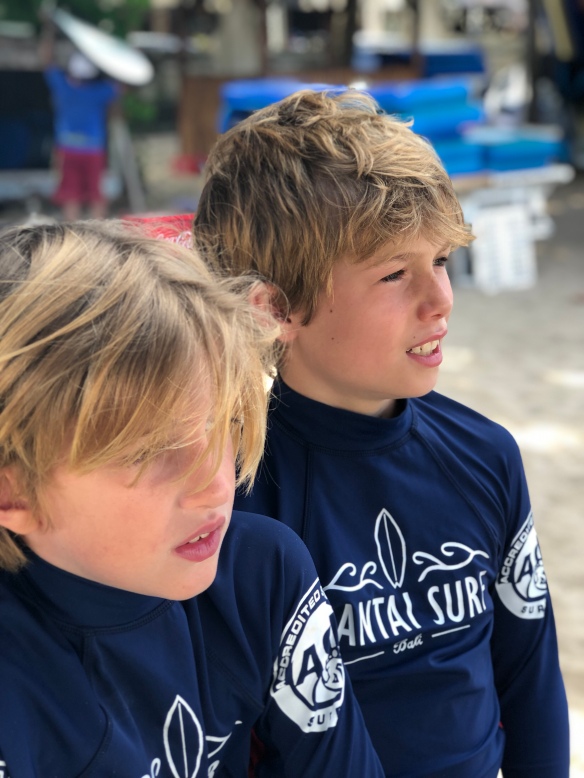 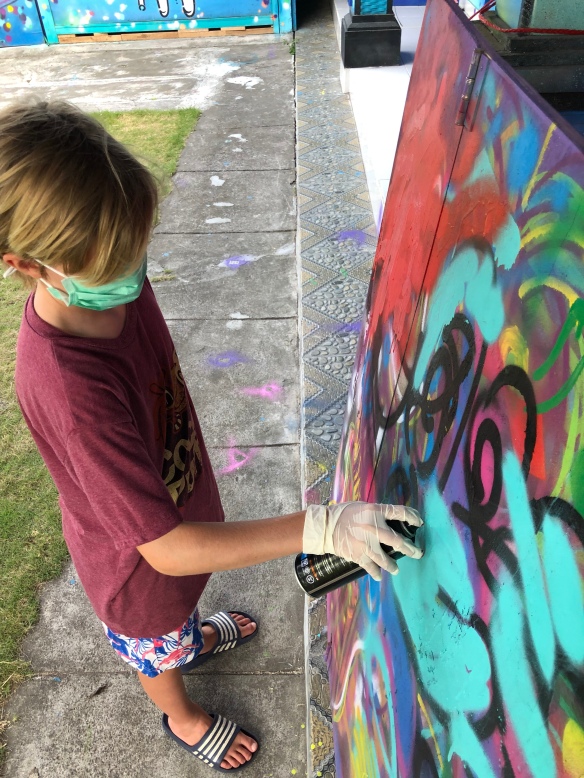 The following day I escaped solo again for a batik class. This was fun but a little rushed even though I was the only one taking the class. This was a shop and small factory with seven batik artists working at stations outside the back of the store/ museum. They sat at small chairs with little stoves beside keeping the wax warm. They had block prints and then would trace around in wax – dip and dye and then retrace and colour in with wax and repeat the dip and dye. The fabric was beautiful with traditional patterns and colours. But I was given the choice of some more basic patterns drawn/traced in pencil on the fabric then I traced over the lines in wax and painted in the dye. So it wasn’t totally authentic and honestly I would have preferred to just freehand a pattern but by the time I realized the entire process and got started it was too late to change. I asked if I could just draw on my fabric but they said it would not work. I’m not sure if it was a language barrier or if they were concerned that I would know how to draw so that the dye was contained and would not run – I’m not sure. It was still a meditative morning and I loved walking through the art gallery part and seeing what the modern batik artists were creating. 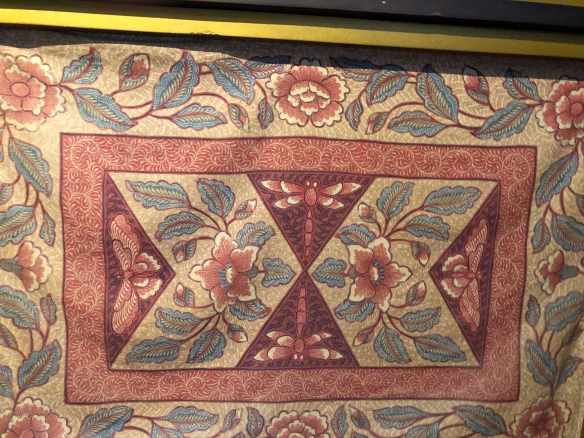 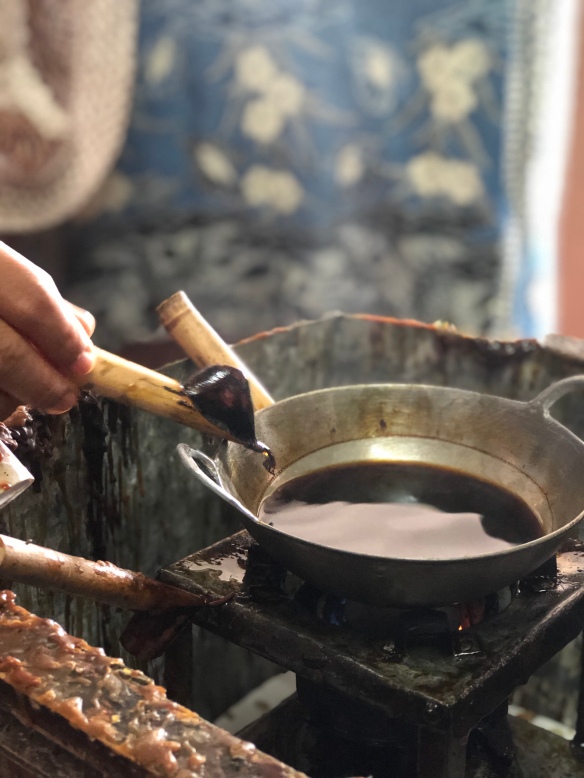 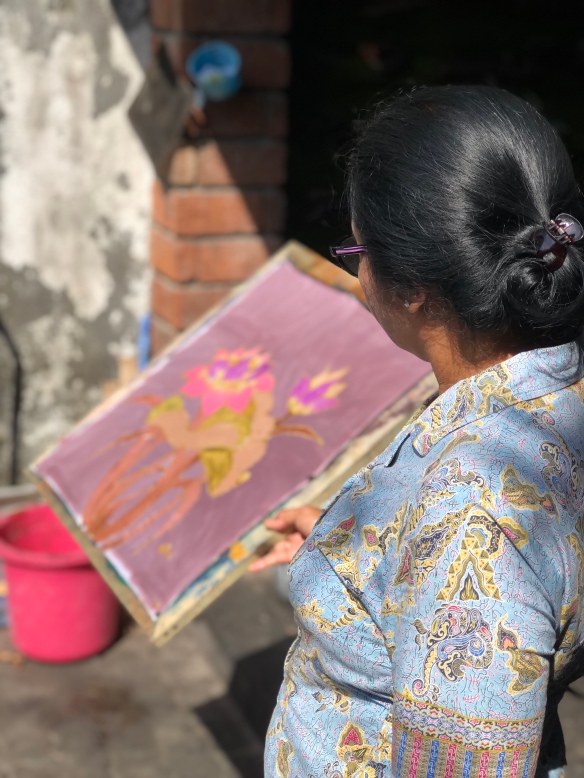 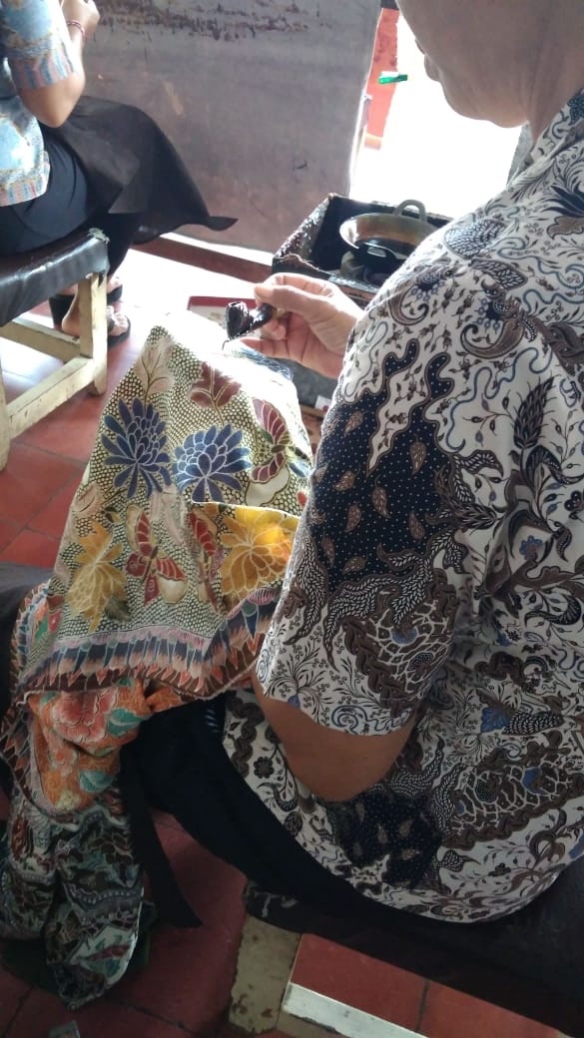 The next day was spent at the water park with our friends – it was fun and fast – these rides were not kidding!! The first slide I went on was so fast I couldn’t lift my head up – gravitational force was pushing it down. It was actually pretty scary since I wasn’t expecting it and with contacts I have to keep my eyes closed. So it was off to the lazy river with Sabine for a hundred floats around the course. I got over my fear watching all the kids flying headfirst down the twin racer slides – I forced myself to go back to the rides. All was going well until l found my self with Chris, Anderson and Mick at the boomerang – an up and down affair where on a two person tube you spiral down to a long chute that deposits you back up an almost vertical wall – you slow and then go backwards back down. It looked terrifying. Anderson wanted to go with Chris and that left me with Mick. He looked up and said, “Please!!! I really want to do it!” What could I do? I did the boomerang – despite how insane it looked it turned out to be my favourite ride. It was a whirlwind day that we were certain the kids would be exhausted from and fall asleep the second they got in the taxi. Unfortunately we ended up with a taxi from the water park and the inside was bright orange and purple – something happened – it was like they had all done a huge hit of cocaine. Absolute insanity and a wall of sound from the back seat!

We had a few more days by the pool. One of those days was Sabine’s birthday!!! My baby turned four and she tried immediately I bargain up to being five or six. Despite a very thorough scouting of bakeries I could not find one to make me a vegan cake so I did what any good parent does – I made one. Normally no problem – however the supermarket was a little light on cake making things and I’m pretty sure I bought something other than baking soda because it was bar none the absolute worst cake I have

Learning to fly the kite 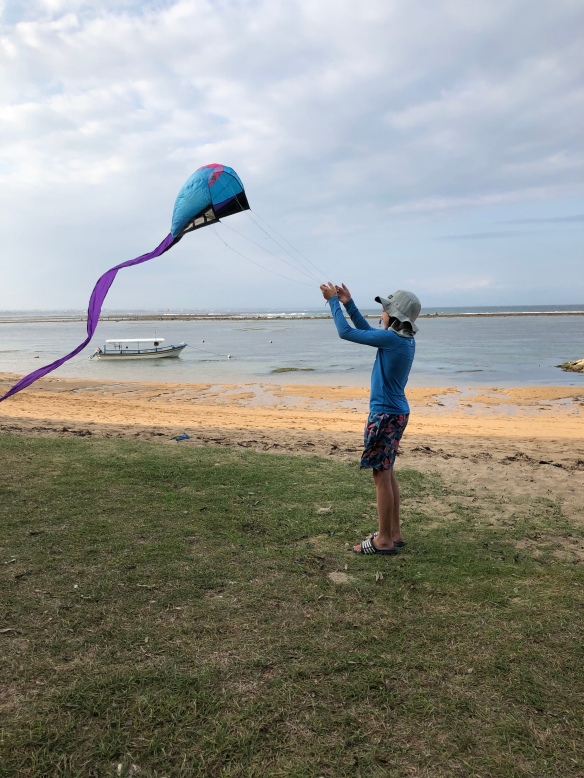 Dance show at the resort

We had a few more days by the pool. One of those days was Sabine’s birthday!!! My baby turned four and she tried immediately to bargain up to being five or six. Despite a very thorough scouting of bakeries I could not find one to make me a vegan cake so I did what any good parent does – I made one. Normally no problem – however the supermarket was a little light on cake making things and I’m pretty sure I bought something other than baking soda because it turned out to be – bar none – the absolute worst cake I have ever made. But it was decorated with strawberry marshmallows and jam (like I said missing a few key ingredients like icing sugar) and mini strawberry Oreos. It looked pretty cute but tasted awful. The kids didn’t seem to mind. They did face painting with paints from an birthday present lol doll painting kit made in China so most likely made with lead. Sabine got a beautiful dream catcher from Tatum and a frangiapani flower hair clip from Mick. I caved and got her a rainbow hair Barbie and the most hideous dress ever – it rivals the Elsa and Anna mesh tank top and short set that Chris got her in Cambodia. But I told her it was pyjamas so hopefully they will never see the light of day. Then suddenly it was our last night! We went to the Australian owned pub to cheer our new friends’ team to victory. A perfect ending to the kid friendly resort week. I feel like I want to go back to Bali to see the west coast and the north coast. I would love to do a home stay and check out Ubud but we are booked into a surf camp on Lombok so we have to go. 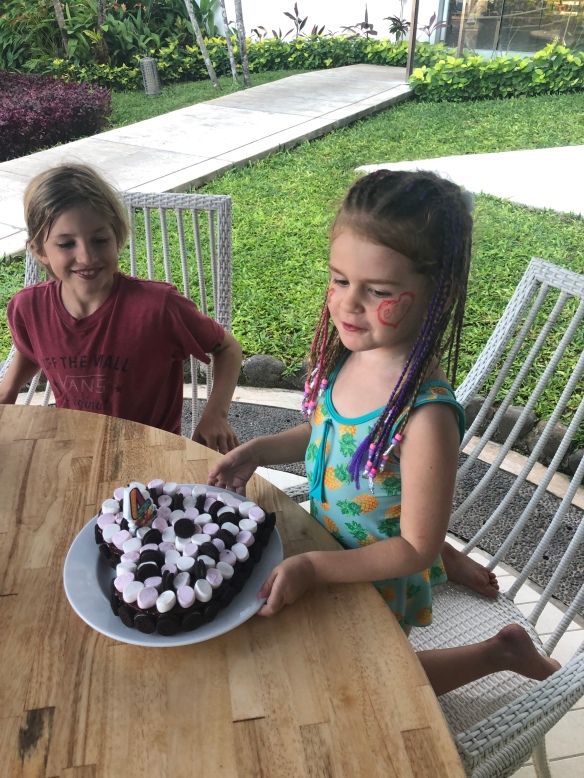 Pork skewers with his own bbq 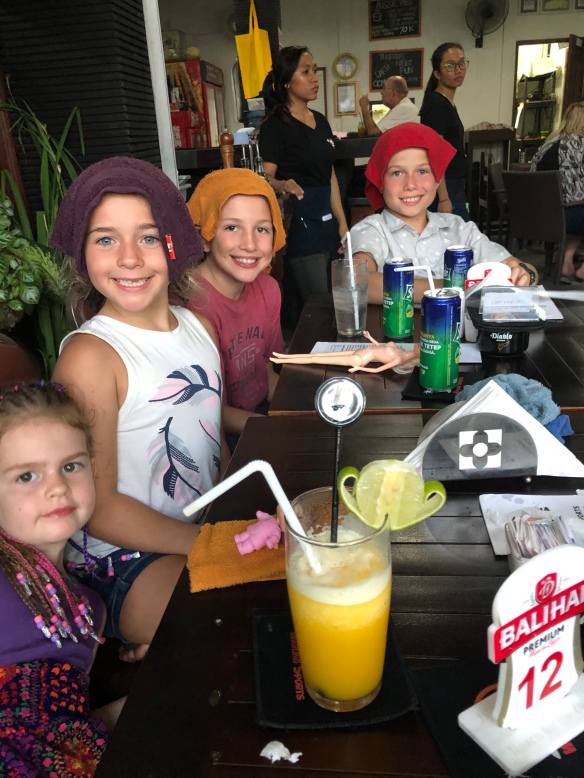 Cheering on the team with cold towels